England beat Pakistan by five wickets in the T20 World Cup 2022 final at the Melbourne Cricket Ground (MCG) on Sunday, November 13 to clinch the coveted trophy. Sam Curran (3/12) and Ben Stokes (52 not out of 49) made the chief contributions in England’s win at the MCG. With the triumph, the England Men’s team now hold both the 50-over and 20-over white-ball crowns.

England won the toss and bowled first in the final. Curran struck early, cleaning up Mohammad Rizwan for 15. Mohammad Haris fell for 8 off 12, trying to go after Adil Rashid (2/22), which included a maiden. The leg-spinner also sent back Babar Azam (32 off 28) caught and bowled. Stokes chipped in by dismissing Iftikhar Ahmed for a duck.

Shan Masood (38 off 28) and Shadab Khan (20 off 14) added 36 for the fifth wicket, but both fell just when Pakistan wanted them to accelerate. Curran and Jordan restricted the lower-order and held Pakistan to under 140. 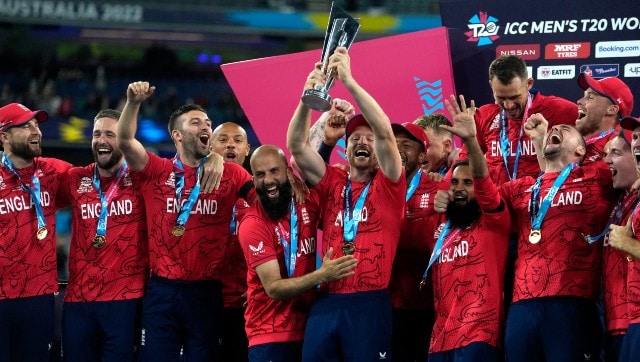 In the chase, Shaheen Afridi cleaned up Alex Hales for 1 with a brilliant delivery. Haris Rauf then dismissed Philip Salt (10) and Jos Buttler (26) to reduce England to 45 for 3. However, Stokes held the innings together in a defiant knock under pressure. He rotated the strike smartly and hit key boundaries.

Harry Brook (20) and Moeen Ali (19) also made handy contributions as Stokes found some support at the other end. Pakistan were hampered at the death as Shaheen again got injured and couldn’t complete his quota of overs. In the end, England got over the line in 19 overs, with Stokes deservedly hitting the winning runs.

Speaking after winning the winning, England captain Buttler said, “To win the T20 World Cup now, immensely proud of everyone here. It has been a long journey and few changes but we are reaping the rewards of how we have played in the last few years. It's been a fantastic tournament.

“After the Ireland match but the character we showed from thereon in must-win games is amazing. He (Matty Motts) has fitted in really well. We have got a few Australians in the coaching staff with us in this tournament and he has led the coaching staff really well, gives the players great freedom,” he added.

Praising Rashid, the England skipper said, “He has been outstanding for us in the last three games, just the guy who makes things happen and his performance was outstanding.”

Hailing Stokes, he added, “He is the ultimate competitor in anything he does and has the experience to bank on as well. He timed it perfectly, the impetus that he and Moeen Ali had just took it away from Pakistan.”