After winning the T20 on Friday, India were victorious in the second practice match as well, a 50-over game against Western Australia at Perth on Saturday

After winning the T20 on Friday, India were victorious in the second practice match as well, a 50-over game against Western Australia at Perth on Saturday. The Indians won the toss and chose to bat first. However, they managed only 249 all-out in 49.1 overs. Their bowlers, however, came out firing amidst the news of Mohammed Shami being ruled out of the entire tour. The pacers and spinners combined exceedingly well to thwart the home side. In the end, Western Australia folded up for 185 in the 50th over as India won by 64 runs.

While Shikhar Dhawan shone in the first game, he failed here, caught by James Muirhead off Drew Porter’s bowling for 4. However, Rohit Sharma, who had thrown his wicket away in the previous encounter, stood up for the team on this occasion. He made a fluent 67 off 82 balls with the aid of six fours and three sixes before perishing to Muirhead. Like Dhawan, the other half-centurion of the T20 win, Virat Kohli, also fell cheaply. He had made 7 from 11 when he was trapped lbw by Porter. India were 19 for 2 when Kohli was dismissed. 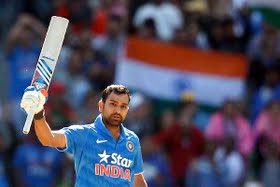 Rohit and Ajinkya Rahane featured in an impressive third-wicket stand of 88. The duo took the score past 100 before Rahane was dismissed for 41 in the 22nd over. Rahane was clean bowled by Muirhead, and hit three fours in his 53-ball knock. Gurkeerat Singh could not utilise the opportunity, as he became one of Porter’s five victims for 6, but Manish Pandey batted with maturity during his half-century. He made a fluent 58 from 59 balls with three fours. Ravindra Jadeja hit a quick 26 to take India to 249. Porter finished with figures of 5 for 37.

It was a disappointing batting effort from India, but their bowlers made sure there was no embarrassment in store for the visitors. Umesh Yadav got the early strike, sending back opener William Bosisto for 13. Barinder Sran did not claim any wickets this time, but was economical. Medium pacer Rishi Dhawan chipped in with two wickets, that of Nick Hobson for 4, and Jaron Morgan who made a fluent half-century. After the pacers did the damage, the Indian spin trio ensured that there was no respite for the Western Australian batsmen, claiming two wickets each.

Jadeja trapped the well-set Jake Carder lbw for 45, and he also dismissed Muirhead towards the end. Ravichandran Ashwin finished with figures of 2 for 32, sending back D’Arcy Short and Porter. Axar Patel was equally impressive, claiming 2 for 29 in eight overs. His victims were Josh Inglis and David Moody. Gurkeerat also chipped in claiming the last wicket. He had Liam O’Connor dismissed for a duck as Western Australia crumbled to 185 all out, to give India their second triumph in as many games.