Steven Finn provided the early breakthrough for England in the run chase when he had Shane Watson (12) caught behind off a steep rising delivery in the 6th over. Australia’s new no.3 George Bailey looked good along with the attacking David Warner. The young pair added 76 runs for the 2nd wicket before George Bailey (29 from 38 balls) chopped an inducker from James Anderson onto his stumps in the 19th over. At this stage, James Anderson was in some pain holding his ankle and hamstring and was on the brink of leaving the park.

A seemingly injured Anderson struck again in the 21st over taking the big wicket of David Warner (56 from 61 balls with 6 fours and a six). The left-hander was brilliantly caught behind by the diving Craig Kieswetter when he was lured into an expansive cover drive. England was on top as Aus slipped to 102 for 3 which soon became 132 for 4 in the 30th over when David Hussey (13) was bounced out by Steven Finn with a nasty short ball defeating his pull shot to hit the helmet and drop on to the stumps.

There was more trouble in store for the Aussies as a young Steven Smith (8) tamely steered a short ball from Bresnan to the keeper to have his team at 147 for 5 in the 33rd over. England were clearly the favourites now with the required run rate climbing and Skipper Michael Clarke left with just one specialist batsman in Matthew Wade.

England were subjected to a counter attack from both Clarke and Wade and just when the visitors were coming back strongly, came a breakthrough for the hosts. In a bizarre mix-up with his Skipper Clarke, Wade was run out having to sacrifice his wicket for the former. Mathew Wade (27 from 32 balls with a four and a six) got an inside edge to squareleg and wanted a single but changed his mind, Clarke on the other hand took off and stopped only after reaching the batting end where Wade was also trying to return back. The Clarke-Wade pair added 57 runs to take Australia to 204 for 6 in 41.5 overs.

The death blow for Australia came in the 43rd over when a well set Michael Clarke (61 from 67 balls with 6 fours and a six) was lbw to Bresnan when he was struck on the backleg after shuffling far too across in a flick shot and missing a straight delivery. There was no chance of winning the match for Australia as they were reduced to 214 for 7. A few fireworks from Brett Lee (29* from 21 balls with 4 fours) were only good in reducing the margin of defeat to 15 runs.

All the four English fast bowlers picked up two wickets each. Graeme Swann bowled well as he gave only 47 runs off his 10 overs. As expected, the Player of the Match went to Eoin Morgan.

England Innings: A superb knock of 89* from just 63 balls from left-handed Eoin Morgan lifted England from an otherwise healthy total to a formidable 272 for 5 in the First NatWest ODI at Lord’s.

Batting under overcast conditions and surviving three early rain breaks, the English openers Alastair Cook and Ian Bell went onto provide a solid start for the hosts. England got 74 runs on the board for the 1st wicket before Ian Bell (41 from 58 balls with 5 fours) departed in the 17th over lbw to a Brett Lee’s inducker. Cook (40 from 59 balls with 5 fours) like Bell couldn’t convert his start into a bigger score as he edged a cover drive off Pat Cummins to the keeper leaving his side at 89 for 2 in 21 overs. 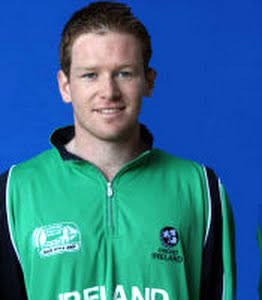 Jonathan Trott held the English innings after the opener’s exit putting up stands of 32 with Ravi Bopara (15, who was caught at slip edging an away going seamer from Clint McKay) and Eoin Morgan. Trott worked his way to a 70-ball 54 before he was clean bowled by Xavier Doherty after playing all around a full ball with his flick shot.

England had a nice platform at 189 for 4 in 40.1 overs when wicket keeper Craig Kieswetter joined a well set Eoin Morgan. The young pair went onto put up a superb stand of 83 runs for the 5th wicket in quick time to help England get to 272. Morgan got better as he progressed in his innings, striking four clean sixes along with 5 fours in an unbeaten knock of 89 from 63 balls. Kieswetter got 25 from 29 balls to help Morgan keep the strike most often in the slog overs.

For the visitors, Clint McKay bowled well for his 1 for 43 in 10 overs.

Toss and Teams: Australia have won the toss and asked England to bat first under overcast conditions at Lord’s in the First NatWest ODI.