India vs New Zealand: Have to keep our feet on the ground and be realistic about this win, says Rahul Dravid

Team India coach Rahul Dravid has stated that while he is happy with the side’s win over New Zealand in the three-match T20I series at home, he wants the boys to be realistic about the result. Dravid pointed out that it was never going to be easy for New Zealand travelling to India immediately the T20 World Cup 2021 final.

New Zealand took on Australia in the T20 World Cup final in Dubai on November 14. Without any break, they proceeded to India for the three-match T20I series, which began on November 17. India won the first two T20Is by five and seven wickets respectively and clinched the final T20I on Sunday by a thumping margin of 73 runs.

Reflecting on the series win, Dravid said at the post-match conference, "It was a really good series win. Everyone played really well right through the series. It feels good, nice to start well. We are also quite realistic. We have to keep our feet on the ground and be a bit realistic about this win. Not easy for NZ to play a World Cup final and then to turn up three days later to play three games in six days, was never going to be easy for them. Nice from our perspective but we have to learn from this series and move forward.” 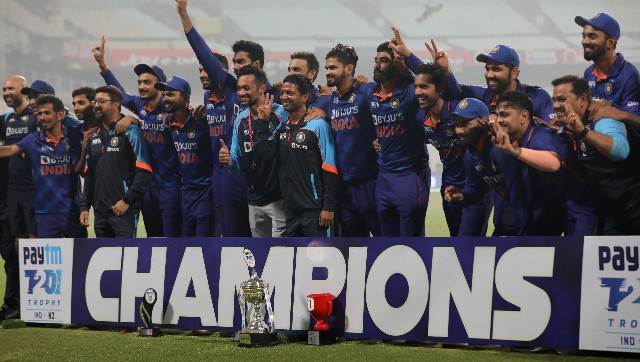 Dravid added that the team has a long journey ahead in the next 10 months that will have its share of ups and downs. He stated, “It's been really good to see some of the young guys come through. We have given the opportunity to some of the boys who haven't played a lot of cricket over the last few months. We have seen some of the skills available to us and we have to keep building on those skills as we go forward.”

India won the toss and batted first in the third T20I of the series in Kolkata on Sunday. Captain Rohit Sharma top-scored with 56 runs while Deepak Chahar played a cameo of 21 runs off just 8 balls as India posted 184/7. In reply, Axar Patel claimed 3 for 9 as India rolled over New Zealand for 111.

India and New Zealand will now meet in the two-match Test series, starting November 25 in Kanpur.