Sachin Tendulkar should have spoken up about Greg Chappell earlier

Not surprisingly, Sachin Tendulkar's criticism of former India coach Greg Chappell is attracting a lot of space in the media. Some of his revelations in his soon to be released book are startling to say the least

Not surprisingly, Sachin Tendulkar's criticism of former India coach Greg Chappell is attracting a lot of space in the media. Some of his revelations in his soon to be released book are startling to say the least. But, while one cannot dismiss the legend's claim considering his credibility, it has to be stated that, with all due respect to Tendulkar, he has spoken up about one of the worst eras in Indian cricket a bit too late. The chapter would make for intriguing reading in Tendulkar's autobiography, but it would do little to undo the wrong that took place during the Chappell era. Sad, because this situation could have been avoided.

It was no secret that Chappell was not on good terms with the Indian team during his tumultuous reign as the side's coach. Yet, apart from Sourav Ganguly, no one really spoke up about the sad state of affairs. One wonders whether even Ganguly would have come out in criticism of Chappell had he not been dropped from the team. After all, it was Ganguly who brought Chappell to Indian cricket. Then again, if the seniors like Sachin Tendulkar and Rahul Dravid knew all that was going on, they should have backed Ganguly then, and pushed for the ouster of Chappell as Team coach. 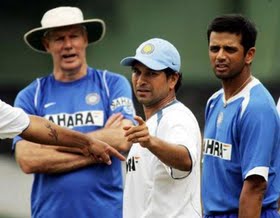 According to Tendulkar in the book, Chappell was a ringmaster, who loved to dominate people. If this was indeed the case, why did the senior players in the team like Tendulkar, Dravid and Laxman allow the situation to reach that stage? Had the Indian stalwarts, as one, strongly and vocally opposed Chappell's alleged tyrannical rule, things might have been different in Indian cricket. Thus, the senior Indian players are as big a culprit in the whole scenario as Chappell. Even Sunil Gavaskar has questioned why the Indian players kept quiet for so long over the contentious Chappell issue.

Now that Tendulkar has come up with a no-holds-barred view of the whole scenario, everyone involved in Indian cricket is trying to cash in on the opportunity. From Maninder Singh to Harbhajan Singh, every one is claiming they knew this was happening. But, the big question arises is, if everyone was aware of what was transpiring, why wasn't a proactive step taken by the men in charge? Were they waiting for a debacle like what happened during the 2007 World Cup? One hopes that the responsibility of the 2007 catastrophe is not completely passed on to Chappell now. The fact is India played poorly in the tournament.

Without questioning Tendulkar's credibility, it is important to look at the other side of the coin as well. While it is clear by now that Chappell isn't rated as a man of high integrity in India, it must be noted that he comes from a country where ruthlessness is paramount in cricket. It might just be a case that Chappell was trying to adapt the Australian model for India. If that was indeed the case, it did not work, was never going to. Whatever be the truth, it is only fair that Chappell be given an impassioned hearing.