Disappointed not to get the 100, but a good effort by the team: Shikhar Dhawan on India’s 3-run win in 1st ODI

Indian captain Shikhar Dhawan admitted that he was disappointed not to get a hundred in the fIrst ODI against West Indies at the Queen's Park Oval in Port of Spain, Trinidad on Friday. However, he was happy with the overall team effort as the Men in Blue held their nerves to clinch a close three-run win and go 1-0 up in the three-match series.

Dhawan top-scored with 97 off 99 after India were asked to bat on losing the toss. The left-hander struck 10 fours and three sixes and featured in an opening stand of 119 with Shubman Gill (64 off 53). Shreyas Iyer also chipped in with 54 off 57. However, India lost their way in the second half, slipping from 213 for 1 to 252 for 5. Eventually, they managed to end on 308 for 7.

Reflecting on India’s batting at the post-match presentation ceremony, Dhawan said, “Disappointed not to get the 100, but it was a good effort by the team. We good a good score in the end.” 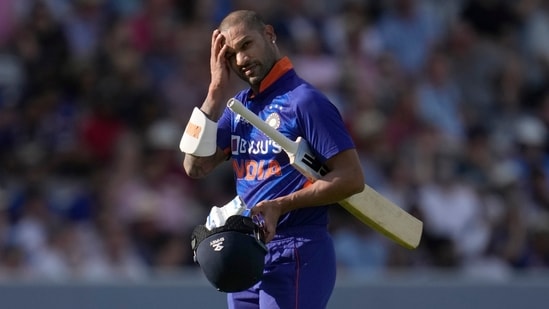 India got off to a good start in their defence as Mohammed Siraj bounced out Shai Hope cheaply. A second-wicket stand of 117 between Kyle Mayers (75 off 68) and Shamarh Brooks (46 off 61) lifted the hosts.

Brandon King (54) contributed a hard-fought half-century while some clean strikes by Romario Shepherd (39* off 25) brought West Indies very close. Siraj, however, held his nerve as India claimed a narrow win.

Admitting that West Indies got much closer to the target that they expected, Dhawan said, “There were nerves in the end and didn't expect it to turn out that way. We kept our cool and one small change in the end where we pushed the fine leg back and that really helped us.”

Regarding the chat on the field as the match got tight, the Indian captain revealed, “The discussion was to use the bigger side as much as we can and we want to keep on learning and make ourselves better for the rest of the competition.”

The second match of the three-game series will also be played at the Queen's Park Oval in Port of Spain, Trinidad on Sunday (July 24).