Bowlers, they say, hunt in pairs. Thus, Wasim Akram was incomplete without Waqar Younis, Courtney Walsh complemented Curtly Ambrose perfectly while Muttiah Muralitharan’s success had a lot to do with Chaminda Vaas’ presence in the side.

Bowlers, they say, hunt in pairs. Thus, Wasim Akram was incomplete without Waqar Younis, Courtney Walsh complemented Curtly Ambrose perfectly while Muttiah Muralitharan’s success had a lot to do with Chaminda Vaas’ presence in the side. The Indians have also had their worthy pairs, be Javagal Srinath and Venkatesh Prasad in the 90’s or Anil Kumble and Harbhajan Singh for a brief period in the 2000’s. In comparison to the above mentioned names, the combination of Ravichandran Ashwin and Pragyan Ojha is rather new. Still, they have given indications that they enjoy bowling in tandem. We skim through the spin duo’s successful performances together in recent times to put forward our point. 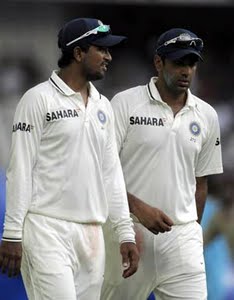 This was the first Test of the series, which marked Ashwin’s Test debut. West Indies batted first in the match, and Ojha picked up 6 for 72 while Ashwin scalped 3 for 81. In Windies’ second innings, it was Ashwin’s turn to shine. He grabbed 6 for 47 while the left-arm spinner claimed one wicket for 37 runs. Ashwin ended with nine wickets in the match as well as the man of the match award while Ojha finished with a satisfactory seven wickets. India ended up winning the match by five wickets.

India batted first and amassed 438. Ashwin and Ojha then combined to pick nine of the ten wickets to fall in New Zealand’s first innings. Ashwin picked up figures of 6 for 31 while Ojha registered three scalps for 44 runs. Kiwis were all-out for 159 and were asked to follow-on. Ashwin and Ojha again did the damage for India in the second innings. Ashwin picked up six more wickets for 54 runs while Ojha grabbed 3 for 48. India went on to win the match by a massive margin of an innings and 115 runs. Ashwin was man of the match for his 12 wickets.

New Zealand batted first and managed to score a decent 365. Ojha was the star for India with 5 for 99. Ashwin managed only one wicket conceding 82 runs. After India replied with 353 in their first innings, it was Ashwin’s turn to outdo Ojha. The Chennai spinner grabbed five wickets for 69 runs even as Ojha chipped in with 2 for 49. Thanks to Ashwin and Ojha, India managed to bowl out New Zealand for 248 runs. India won the game by five wickets. Ashwin and Ojha combined to pick up 13 of the 20 Kiwi wickets to fall in the match. Ashwin was declared man of the series for his consistent wicket-taking efforts.

The recently concluded Test between India and England was Ojha’s for sure as far as the bowling department is concerned. Ojha snared 5 for 45 in England’s first innings while Ashwin did the supporting act with 3 for 80. In the second innings, Ojha was again the star with 4 for 120 even as Ashwin struggled with figures of 1 for 111. India won easily, by nine wickets.

Thanks to Ashwin-Ojha, there’s hope for India’s spinning future.