Australia recovered from 79 for 5 to post 288 and beat West Indies by 15 runs at Nottingham. Nathan Coulter-Nile was the surprise star for the Aussies

Australia recovered from 79 for 5 to post 288 and beat West Indies by 15 runs at Nottingham. Nathan Coulter-Nile was the surprise star for the Aussies with the bat, blasting 92 from 60 balls. Steve Smith contributed 73 while Mitchell Starc sent West Indies packing with 5 for 46.

After the game though, Coulter-Nile made a shock admission that he would not be surprised if he is dropped for the next match. Australia will face India at The Oval on Sunday despite the fact that he created a record by blasting 92, the highest by any player at number 8 or lower in the World Cup.

However, he has gone wicket-less in the two matches so far, with 0 for 36 against Afghanistan and 0 for 70 against West Indies. “I think I just went 0/70, didn’t I? We’ve got two world class bowlers and I’m not in the team to make runs, hopefully the top order does that," Coulter-Nile was quoted as saying in a news.com.au report when asked about whether he feels secure about his place in the side. 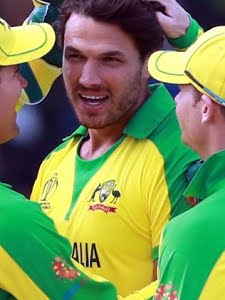 “I wouldn’t be surprised if I got dropped for the next game, honestly. I’m in the team to take wickets and had two wicketless games so we’ll see how we go," he added.

The fast bowler added that he likes the competition in the team coming from the likes of Kane Richardson or Jason Behrendorff. “I actually like it, I think it’s good to have competition. It would be no good if you had no one pushing you to try and get better so I love it,” he said.

Coulter-Nile also had praises for Steve Smith, with whom he shared a match-turning century stand for the sixth wicket. “He was just trying to keep me level-headed, just giving me the confidence to play my shots. Just tell me what he thought they were going to do and where we thought the runs were going to come," explained Coulter-Nile.