Sri Lanka defeated Pakistan by 16 runs in a low scoring Semi Final at the Premadasa Stadium to enter into the Finals of the ICC World T20 2012! It is the second time that Sri Lanka have made it to the World T20 Final.

Sri Lanka defeated Pakistan by 16 runs in a low scoring Semi Final at the Premadasa Stadium to enter into the Finals of the ICC World T20 2012! It is the second time that Sri Lanka have made it to the World T20 Final. Pakistan on the other hand have lost their second consecutive Semi Final.

Pakistan were favourites to win the match after restricting Sri Lanka to 139. But as always, the Pakistani batsmen just didn't play well under pressure in a run chase. Pakistan got off to a start but a steady one at 55 for 2 in 9.1 overs but lost the plot as the duo of Angelo Mathews and Ranga Herath combined to reduce them to 64 for 4. Skipper Hafeez (42 from 40 balls with 4 fours and a six) who was playing well provided the hope for Pakistan but got out leaving the job half done at 91 for 5. The likes of Malik, Afridi failed to contribute for Pakistan despite having loads of experience. 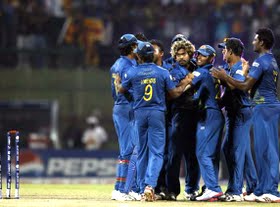 After Hafeez’s departure, everything was left on the shoulders of Umar Akmal to get the remaining runs and the little right hander couldn’t take Pakistan home though he stayed till the end. The younger Akmal remained unbeaten with a helpless 29* (from 22 balls).

For Sri Lanka, Rangana Herath did all the difference taking 3 for 25 in 4 overs. It included the consecutive wickets of Hafeez and Afridi which was a big turning point. Lasith Malinga, of course did a fine job despite bowling a few costly wides, dropping a sitter but in the end coming good with figures of 4-0-19-0. Sri Lanka’s Skipper Mahela Jayawardene got the Man of the Match award.

Sri Lanka Innings: Sri Lanka struggled to reach 139 in 20 overs despite losing only 4 wickets on a slow and dry pitch at the Premadasa. The hosts are definitely have come up with a modest total and it is Pakistan’s match to lose it from this point of time. Pakistan will have to play some aggressive shots unlike the Lankans who kept on playing the waiting game too long.

The start from Lanka was solid with Skipper Mahela Jayawardene scoring 42 from 36 balls with 7 fours but his partner Tillakaratne Dilshan was off colour. Dilshan played out 17.5 overs to score only 35 from 43 balls (with 3 fours)! A good last over from Umar Gul which was taken for 16 runs helped Sri Lanka to a better looking total of 139 for 4. Otherwise it would have been a lot worse.

Toss and Teams: Hosts Sri Lanka have won the toss and elected to bat first in the 1st Semi Final against Pakistan at the R Premadasa Stadium in Colombo. The pitch is expected to suit the slower bowlers according to Mahela Jayawardene.

Both Sri Lanka and Pakistan have made one change each going into this big Semi Final. The Lankans have opted to play the experienced Rangana Herath in place of the young rookie Akila Dananjaya. Pakistan have made a surprise move by excluding all-rounder Abdul Razzaq to include left-arm swing bowler Sohail Tanvir.