Underdogs Kings XI Punjab pulled off a 7-run upset victory over hosts Chennai Super Kings. Needing 157 to win, CSK struggled to find the momentum in their innings on a pitch that slowed down with slightly low bounce.

Azhar Mahmood was the hero of Kings XI Punjab removed the well set CSK openers – Faf du Plessis (29 from 20 balls) and S Badrinath (25 from 18 balls) to bring his team back in the game. CSK lost whatever initial momentum it had because of a poor innings of 6 from 14 balls from Wriddhiman Saha who was sent ahead of the likes of Dhoni, Bravo and Albie Morkel. 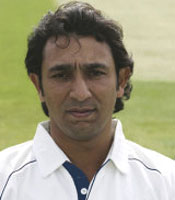 When Skipper MS Dhoni got run out, CSK were struggling at 88 for 5 in 13.2 overs. Although, Dwayne Bravo and Albie Morkel were available for CSK in the last five overs, the pair couldn’t take them home with their big strikes. Chennai Super Kings came second in the contest with a total of 149 for 8. Apart from Azhar Mahmood who took 3 for 25 in 4 overs, leggie Piyush Chawla came good in the middle overs with 2 for 20 in his 4 overs.

Early on, Kings XI Punjab from a position of strength at 97 for 2 in 12 overs got restricted to a disappointing 156 for 8. Opener Mandeep Singh was the top scorer of the Kings XI innings with 56 which took 50 balls (with 5 fours and a six). His opening partner Shaun Marsh chipped in with 32 from 22 balls (with 4 fours and a six). For CSK, Albie Morkel took 3 for 29.

Toss and Teams: David Hussey, the stand-in captain of the Kings XI Punjab has won the toss and elected to bat first against hosts Chennai Super Kings at the MA Chidambaram Stadium in Chepauk.