The manner in which England's openers kept India at bay on the penultimate day of the Vizag Test, it seemed India could have a tough task on hand on the final day. But, that wasn't to be the case as India's spinners easily wrapped up things on the final day

The manner in which England's openers kept India at bay on the penultimate day of the Vizag Test, it seemed India could have a tough task on hand on the final day. But, that wasn't to be the case as India's spinners easily wrapped up things on the final day. As expected, England skipper Alastair Cook's dismissal in the last over on day four proved to be a major turning point. Until his dismissal, Cook grinded the bowling with precision, almost putting the Indian spectators to sleep. Had he and Haseeb Hameed, who also battled hard, seen day four through, India might have had at tough task on their hands. As things turned, the spinners won it with a breeze for India.

While England would be disappointed that they could not put up much of a fight on the last day, it was their first-innings batting effort that really was the difference between the two teams. In response to India's impressive score of 455, England needed to get as close to the total as possible. But, that wasn't to be as the entire England team folded up for 255, giving India a huge lead from where they couldn't lose the match. Cook, Hameed and Moeen Ali all fell cheaply while Joe Root was dismissed immediately after crossing fifty. And, had it not been for gritty half-centuries from Ben Stokes and Jonny Bairstow, they would not have crossed 250.

One of the biggest worries for England that has emerged at the conclusion of the two Tests has been the poor run of scores of Ben Duckett. He just hasn't looked the part in the two matches thus far. To be fair to Duckett, these are still very early days in his Test career, but looking at the way he has struggled, some experts have already begun pointing out that he doesn't have the technique to play spin bowling, especially in Asian conditions. England have tried a few players in the middle order, but are still looking for a suitable replacement for Ian Bell. If they can get their batting in order, England can certainly trouble India, as James Anderson, Adil Rashid and Moeen have demonstrated. 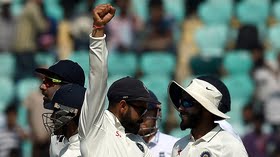 Shifting focus to India, they took full advantage of winning the toss, and making first use of the surface. Cheteshwar Pujara and Virat Kohli batted excellently to stamp their class on the match with belligerent hundreds. Things weren't easy for the duo as India had lost the openers early, but Kohli and Pujara dug in hard to put India on top. Kohli put in an impactful performance in the second innings as well. Yet again, Ravichandran Ashwin proved how vital he is to the team as an all-rounder. Not only did he claim eight wickets in the match, his first-innings fifty was vital in India putting up a good total. Ravindra Jadeja and Jayant Yadav came up with nice support acts, the latter chipping in with the ball as well.

Even amidst the victory there were a few worrying aspects for the hosts. It was not a completely dominating performance in the sense that both the openers failed in both innings. Lokesh Rahul was worked over while Murali Vijay is increasingly getting into the habit of losing steam after an impressive start. It may be too early to worry about Ajinkya Rahane, but the man who prides himself on being consistency-personified will himself be disappointed with his efforts in the two Tests so far. Remember, he was poor in the New Zealand ODIs as well, with only one fifty in five games. Knowing his insatiable hunger for runs, Rahane would be raring for a hundred.