IND vs SA 4th ODI: Team India fought back strongly at Chennai following the reversal at Rajkot to level the series 2-2. The comfortable 35-run triumph at Chepauk against the South Africans means the final ODI at Wankhede in Mumbai now becomes the decider

Team India fought back strongly at Chennai following the reversal at Rajkot to level the series 2-2. The comfortable 35-run triumph at Chepauk against the South Africans means the final ODI at Wankhede in Mumbai now becomes the decider. The victory was registered thanks to a splendid 138 from Virat Kohli which took India to a competitive 299. Kohli featured in crucial partnerships with Ajinkya Rahane (45) and Suresh Raina (53) as India recovered from early setbacks. For South Africa, AB de Villiers came up with another of his marvellous hundreds. But, it was an effort in vain, as there was precious little for him in the form of support.

Chasing 300, South Africa began in confident fashion, racing away at seven an over against the pacers, Bhuvneshwar Kumar, in particular, being wayward once again. But, Mohit Sharma delivered the big breakthrough for India, as he got the out-of-form Hashim Alma to mistime a pull. The spinners then took over, and completely strangled the Proteas. Quinton de Kock looked completely in control against the pacers, and raced into the 40s. But, Harbhajan Singh got him with a classic off-spinner’s delivery, inviting him to drive, and inducing the edge that was brilliantly anticipated by Rahane in the slips.

De Kock’s wicket put India on top, and they maintained the momentum till the end although de Villiers’ dangerous presence would have kept them on their toes. Axar Patel joined the wicket-taking act getting Faf du Plessis caught behind. Harbhajan ensured David Miller’s poor run continued, trapping him lbw as the left-hander played a premeditated defence. Even as the equation was getting out of hand, de Villiers came up with some outlandish strokes. He reverse swept the spinners successfully even while getting himself in all sorts of tangles. And, when the pacers came on, he easily dispatched them in the fence. He was left with too much to do though. 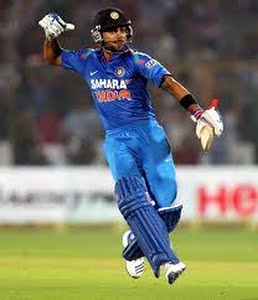 On a day that saw many impressive performances, Kohli’s was the one that stood out. He came in at his preferred one down position. India had again lost a wicket early, this time of the in-form Rohit Sharma, who flicked Chris Morris straight to du Plessis having made a brisk 21. The advantage of winning the toss seemed to be slipping away as the struggling Shikhar Dhawan played a waft down leg side, only for him to be brilliantly caught by de Kock, diving down the leg side. Kohli needed to deliver for India to stay alive, and he did.

It was a typical Kohli innings, where he was busy throughout, and kept rotating the strike, while finding the boundaries at frequent intervals, a number of times even clearing it. He was particularly severe on the two spinners, Imran Tahir and Aaron Phangiso, and lofted them with ease. Even after completing his hundred, he carried on, falling with 10 balls to go. Rahane supported him well, rotating the strike nicely. And, after his dismissal, Raina, heeding to his captain’s advice, spent some time at the crease, and was rewarded with a fifty. India did not finish strongly, but the spinners made sure Kohli’s brilliance did not go in vain.