Even as most of the talk in T20Is is centering around preparations for the upcoming World T20, Indian vice-captain Rohit Sharma feels it is important to live in the present. India take on West Indies in the third and final T20I of the series to be played today at the Wankhede Stadium in Mumbai. The series is currently tied 1-1, with both teams having secured one win each.

Rohit said they need to keep winning matches than just looking at the bigger picture. “See, I don’t want to keep saying that we are trying to build a squad for the World Cup. It is still a long, long way ahead. We just need to focus on winning the series and that will keep us in good state, moving forward,” Indian vice-captain said at the pre-match media conference. “If we keep winning games, keep doing the right things on the field, the composition of the team will take care,” Rohit added 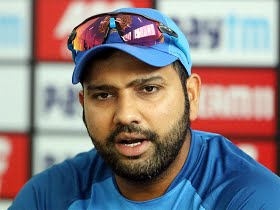 The experienced cricketer pointed out that West Indies is a quality side and that upcoming series’ against Sri Lanka and New Zealand will also be challenging. “Right now, we need to see what are the mistakes we are making so that when we come out and play every fresh game, we look like a different side,” Rohit explained.

Despite the loss in the second T20I, all-rounder Shivam Dube’s maiden half-century was a major plus point. However, the likes of Rishabh Pant and Washington Sundar will be under pressure following a string of average performances. Also, India will need to lift their fielding, which has been abysmal so far, and went a long way in them losing the 2nd T20I.

Rohit also admitted that India are better chasers, and need to work on their game while batting first, as evident from the loss in the in Thiruvananthapuram game. “Yes, of late our chasing has been good compared to posting targets. It was a good target that we posted (last match), but again it’s a new set of guys. There are a lot of inexperienced players along with experienced guys, but that is what every T20 team now has a bit of inexperience, along with that some experience. Those two elements need to come together to form a very composite side.”

Rohit was also all praise for West Indies skipper Kieron Pollard, also his Mumbai Indians team-mate. The Indian opener felt that Pollard is doing a wonderful job as leader of the West Indies side. “I know Pollard really well and he has a great knowledge about the game. I know as a leader what he would be expecting from the team. Under his leadership, it is a different team that we are seeing now, so yes, we have to be at our best when we play them,” Rohit said.