India managed to take the first day’s honours thanks to a solid partnership between Cheteshwar Pujara and Yuvraj Singh which defied England from clawing back into the contest.

India managed to take the first day’s honours thanks to a solid partnership between Cheteshwar Pujara and Yuvraj Singh which defied England from clawing back into the contest. The homeside finished Day 1 at an impressive 323 for 4 in 90 overs with Pujara on 98* (from 181 balls with 13 fours) in the company of Yuvraj Singh who has worked his way to 24* (from 47 balls with 2 fours).

The hosts were under some pressure when Virat Kohli was dismissed, clean bowled through the gate by Graeme Swann. Kohli (19 from 67 balls) was beaten in the air and in the length, and was unsure whether to play forward or go back, and in the process was bowled through the gate by a turning off break. The youngster should have been dismissed much earlier by the same bowler when he edged his cut to slip but for Jonathan Trott putting him down.

India at 283 for 4 in the 77th over were under slight pressure as Swann was in control of things. Yuvraj Singh doesn’t have a great reputation against quality spin but he kept his head down to see off the threat while Pujara was very compact at the other end. The duo saw through the rest of the day’s play safely to help India sustain its advantage. For the Englishmen, Graeme Swann was the lone man fighting with figures of 32-5-85-4. 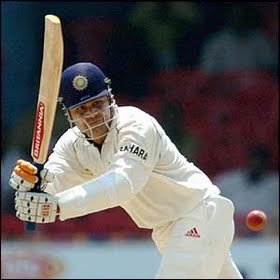 Tea Report: England have crawled back in the game ever so slightly thanks to Graeme Swann’s efforts. The offie claimed three wickets in the afternoon session but England couldn’t stop India from consolidating its position to 250 for 3 in 58 overs at Tea. The hosts were dented though with the loss of Virender Sehwag and Sachin Tendulkar in Swann’s return spell before Tea.

It was Swann who produced the first breakthrough as Gautam Gambhir’s risky habit of backing away to cut away inside out proved to be his downfall eventually with the offie getting one to skid through low to strike the exposed off stump. Gambhir’s hard work yielded only 45 runs (from 111 balls ith 4 fours) but it was a good opening stand of 134 in 29.5 overs with Sehwag.

India got another solid partnership going with the positive Cheteshwar Pujara joining Sehwag who went onto complete his 23rd Test century in 90 balls. All was well for India until Swann returned for a new spell in the 51st over and cleaned up Sehwag with a turning off break in an attempted sweep shot. Sehwag was dismissed for a run-a-ball 117 (with 15 fours and a six) leaving India well placed at 224 for 2.

Sachin Tendulkar (13 from 18 balls) spoilt the situation for India by throwing his wicket away with a needless step out lofted shot off Swann which was caught at deep wide mid wicket. By Tea, Pujara is at the crease on 68* along with Virat Kohli who is yet to open his account.

Lunch Report: India had a fabulous morning start with openers Virender Sehwag and Gautam Gambhuir finally form and putting up the much needed century stand after a long time. At Lunch on Day 1, the two openers have dominated the English bowling to take the hosts to 120 for no loss in 28 overs.

Virender Sehwag is batting like a fast train, on 79* from just 66 balls with a dozen fours and a six off Tim Bresnan. Gautam Gambhir on the other hand is working hard on 37* from 103 balls with 3 fours. The three English pacers looked pretty harmless on a lifeless Motera pitch. Graeme Swann looked threatening against Gambhir with his drifters and arm balls but Sehwag played him out solidly so far.

India’s worry in the afternoon session will be the reverse swinging ball and the pitch has been on the slower and lower side.

Toss and Teams: India have won the toss and elected to bat first in the opening Test at Ahmedabad. No real surprises in the Indian XI with Yuvraj Singh taking the place of Suresh Raina from the last test played against the Kiwis. Harbhajan Singh stays out so the combination is two pacers and two spinners.

England have got in Tim Bresnan for the injured Steven Finn in the XI.

Pitch Report: It is a virgin wicket at the Motera with no records of any competitive cricket played on this newly laid pitch. The look of it is very pale and bald. It has a bit of a sandy nature to it. At the start of the Test, the pitch seems to have a touch of moisture which should encourage both the seamers and spinners. Most probably the pitch will be suiting the spinners as the cracks are expected to break apart. However, the only worry is whether the turn will be on the slower side which will then make the spinners not so effective.