Bad light and rain brought a slightly early end to the proceedings on Day 1 of the Second Test. New Zealand were doing really well at 328 for 6 in 81.3 overs before play was called off abruptly.

Update at Stumps on Day 1: Bad light and rain brought a slightly early end to the proceedings on Day 1 of the Second Test. New Zealand were doing really well at 328 for 6 in 81.3 overs before play was called off abruptly. Wicket Keeper Kruger van Wyk is batting on a career best score of 63* (from 85 balls with 9 fours) while sharing a solid 82-run unbroken stand for the 7th wicket with all-rounder Doug Bracewell (30* from 61 balls with 3 fours).

India managed one wicket in the final session that of Ross Taylor whose heroics were ended by Pragyan Ojha in the 64th over. Taylor, who scored 113 (from 127 balls with 16 fours and 2 sixes) got out after shuffling far too across for a predetermined sweep and missing a full ball infront of middle from Ojha to leave his team at 246 for 6. Just when India thought of 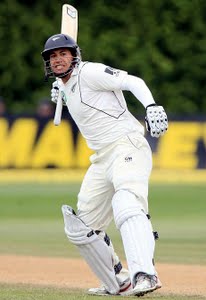 having an easy workload after Taylor’s exit, came a stubborn partnership between Kruger van Wyk and Bracewell with the duo scoring runs at a fair clip. India had taken the second new ball just prior to the bad light interruption. Pragyan Ojha was the bowler of the day for India taking 4 for 90 in 27 overs.

Update at Tea on Day 1: Ross Taylor led from the front to score a smashing unbeaten ton to carry New Zealand to an impressive total of 240 for 5 in just 59 overs by Tea. Taylor registered his 7th Test century in just 99 balls as the Indian fielders were at the receiving end to a great counter attack from the Kiwi Captain.

India did decent damage control in the afternoon session by taking two wickets. Daniel Flynn was the first to depart post lunch after missing a predetermined sweep shot to a full ball from R Ashwin for a third such lbw dismissal in this series. Flynn otherwise looked good for his 33 (from 53 balls with 6 fours) in a 4th wicket stand of 107 which ended in the 43rd over.

The hosts got a bonus wicket around 9 overs after Flynn’s exit when James Franklin whipped a dipping full toss from Ojha to the diving Suresh Raina at mid wicket. The Kiwis ended the session with Ross Taylor moving onto 112* (from 119 balls with 16 fours and 2 sixes) along with wicket keeper Kruger van Wyk (7*) at the crease.

Update at Lunch on Day 1: New Zealand have been reduced to 108 for 3 in 29 overs by Lunch on Day 1 on what seems to be a sporting pitch at Bangalore. Skipper Ross Taylor is at the crease on an attacking 27* (from 28 balls with 2 fours and a six) along with Daniel Flynn (7*) for the tourists.

MS Dhoni made a freakish move at the start of the Test match by bowling Pragyan Ojha in the very first over! It was in the second over itself that the Kiwis lost their first wicket with Zaheer Khan coming up with a length delivery that nipped back slightly to hit the pad of Brendon McCullum (0) plumb infront for an lbw.

The Kiwis were steadied after the early wicket by Martin Guptill and Kane Williamson. Pragyan Ojha broke the stand by deceiving Kane Williamson (17 from 44 balls) with a tossed up drifter that straightened to beat the inside edge of a forward defence to have the right hander lbw infront of middle. Williamson departed in the 19th over with NZ at 63 for 2.

Just about 18 minutes to go for lunch, the well set Martin Guptill (53 from 79 balls with 8 fours) threw it away by dragging a rash flick off Pragyan Ojha in the air and straight into the hands of mid wicket as NZ slipped to 89 for 3.

Toss and Teams: New Zealand have won the toss and elected to bat first in the Second and Final Test at the M Chinnaswamy Stadium in Bengaluru under overcast conditions.

The Kiwis who are trailing behind by 0-1 in the series have made one change with Tim Southee replacing Chris Martin. India have retained the same XI that thrashed the tourists at Hyderabad.

The pitch at the M Chinnaswamy Stadium has a bit of grass and is a lot harder than the one at Hyderabad. There should be assistance for the seam bowlers with some lateral movement on offer. Also there will be good bounce in this pitch to interest the bowlers. Batting wise, it should be good for the first two days easily and it will only be later in the match that it would start to take turn.

The weather remains to be a concern at Bangalore though with intermittent showers likely to come into play.