England’s number one reputation at stake

The Oval disaster may be confined to history, but can England overcome the scars they were given over four days of utterly one-sided cricket? Headingley will be a new venue, and that itself should give England hope to start afresh. They have no option but to fight back if they are to keep their credibility intact.

The Oval disaster may be confined to history, but can England overcome the scars they were given over four days of utterly one-sided cricket? Headingley will be a new venue, and that itself should give England hope to start afresh. They have no option but to fight back if they are to keep their credibility intact. Last year, around the same time, England had snatched away the crown from India, by thumping them handsomely. Now, the hosts find themselves in a similar situation. The scene is pretty simple for England to think of it. A win will give them another chance to maintain their number one ranking while a loss will officially put Proteas on top of the rankings. While England know what they have to do, the pertinent question is whether they have the resources vis-à-vis a strong South African line-up.

First and foremost, England’s decision to prepare a dry pitch backfired big time at The Oval. So, expect some grass on the Headingley surface. Here again, there is no reason why the South African seamers cannot exploit the bowler-friendly conditions, and put the England batsman under pressure. What England need to basically do is perform way better than how they did at The Oval. Easier said than done, but that is what should be expected of the number one team in the world. 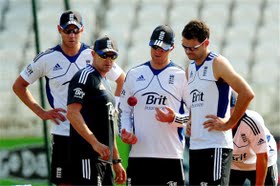 For England to inspire a turnaround, they will need some change in plans. Andrew Strauss and Andy Flower must have worked overtime for sure, but only time will tell whether the designs work. For one, Strauss will have to come up with better innovations as leader. Some team changes will also be necessitated for sure. Again, whether they work or not will be another matter altogether.

The experiment with Ravi Bopara was short-lived. All talks over him becoming England’s permanent number six have been put on the backburner for the moment. His place will be taken by James Taylor, whose century in his last first class game has brought him in to the spotlight. England have struggled with the number six position – Jonny Bairstow and Eoin Morgan also failing to cement their place at the spot before Bopara. All this will be at the back of England’s mind as they take on South Africa at Headingley.

In contrast, South Africa would be buoyed by the way they performed at The Oval, but they need to put the match behind them when their players take the field on Thursday. It’s not that South Africa don’t have weaknesses. It’s just that every flaw of theirs got hidden under the pasting South Africa gave England in the first Test. Alviro Petersen is yet to establish himself at the top of the order while J P Duminy and Jacques Rudolph are at a stage in their career where they need to prove their worth all over again.

England somehow need to find a way out to exploit the chinks in South Africa’s camp.