Aaron Finch and Shaun Marsh featured in the best ever partnership in one-dayers for Australia when they added 246 in 38.2 overs in the ODI played against Scotland at Edinburgh.

Aaron Finch and Shaun Marsh featured in the best ever partnership in one-dayers for Australia when they added 246 in 38.2 overs in the ODI played against Scotland at Edinburgh. The partnership ended when Finch was dismissed for 148 off 116 balls while Marsh went on to blast from 151 from 149 balls. Australia went on to win the match comprehensively by 200 runs, first posting 362 on the board and then cleaning up Scotland for 162. Here’s a look at the best partnership in one-dayers for other top sides. 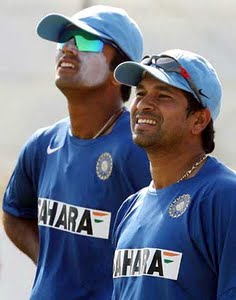 Tendulkar and Dravid featured in that massive stand for the second wicket in a game against New Zealand at Hyderabad in November 1999. India batted first and lost Sourav Ganguly for 4. However, skipper Tendulkar and Dravid went on and on. Tendulkar smashed an unbeaten 186 off 150 balls while Dravid was dismissed for 153 from an equal number of balls. Chris Drum was the most expensive bowler for New Zealand, conceding 85 from his 9 overs. India posted 376 and bowled out the Kiwis for 202.

In a game dominated by Pakistan at Sharjah against New Zealand in April 1994, Sohail and Inzamam compiled magnificent hundreds. Pakistan batted first in the game and, opening the innings, Sohail blasted 134 in 146 balls. Inzamam went one better, remaining unbeaten on 137 having faced 129 balls as Pakistan amassed 328 for 2. The usually mean Gavin Larsen conceded 71 runs in 10 overs. Pakistan won the game by 62 runs.

This was an amazing performance by the Lankan openers. Batting first at Leeds in July 2006, England had raked up 321 for 7. Sri Lanka however clinched victory with more than 12 overs to spare. Tharanga creamed 109 off 102 balls while Jayasuriya thwacked 152 off only 99 balls. Sri Lanka were victors by eight wickets.

South Africa’s best partnership came against Pakistan at Johannesburg in March 2013. The Proteas batted first, and while Amla made a sublime 122 off 113 balls, skipper de Villiers smashed 128 off 108 balls. South Africa ended with 343 for 5 and restricted Pakistan to 309 to win by 34 runs.

England’s best partnership is in the name of an unlikely pair. Strauss and Trott featured in the stand against Bangladesh at Birmingham in July 2010. Strauss made 154 from 140 balls even as Trott compiled 110 off 121 balls. England smashed 347 for 7 and won by 144 runs.

Opening the innings in an ODI against Ireland at Aberdeen in July 2008, openers Marshall and McCullum smashed 161 and 166 off 141 and 135 balls respectively. The Kiwis ended up 402 for 2 and won the clash by a massive margin of 290 runs.

Chanderpaul and Hooper featured in the record stand against West Indies at East London in January 1999. Chanderpaul made 150 from 136 balls and Hooper smashed 108 in 119 balls. Windies made 292 for 9 and beat South Africa by 43 runs.