I never saw Tony Greig bat on live television. How could I, he had retired six years before I was born! But, I listened and watched his commentate for over two decades. And boy, was he brilliant. All of us who grew up in the 90’s and loved cricket had Sachin Tendulkar as our staple diet, but the meal would be incomplete without the dessert named Tony Greig.

I never saw Tony Greig bat on live television. How could I, he had retired six years before I was born! But, I listened and watched his commentate for over two decades. And boy, was he brilliant. All of us who grew up in the 90’s and loved cricket had Sachin Tendulkar as our staple diet, but the meal would be incomplete without the dessert named Tony Greig. And when the two met, it was as sumptuous a treat as one could have. It wouldn’t even be wrong to say that two reasons why we loved cricket growing up in the 90’s go by the name of Tendulkar and Grieg.

One of the reasons Greig was so popular as a commentator was because of the infectious zest he had for the game. It was evident in every word he said. Watching Greig commentate in a game quite literally transported the fan into the ground, such was the descriptive genius of the man. Even if two batsmen were crossing over for a regular single, Greig had the inherent capability to make the viewing interesting for the spectators. When he was on the mike, rarely, did cricket seem boring. Actually, not rarely it never did. 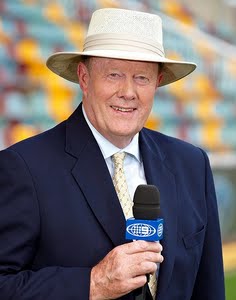 The likeability of Greig as a commentator can be easily gauged from the fact that people still remember the jewels he delivered during two of Tendulkar’s sensational knocks in Sharjah in 1998:

‘This little man is the nearest thing to Bradman there’s ever been.’

‘The little man (Sachin) has hit the big fella (Tom Moody) for a six. He’s half his size.’

‘Oh, he’s hit this one miles. What a six, what a six! Sachin Tendulkar, what a wonderful player.’

Sachin played two absolutely blinders against Australia without doubt, but the contribution of Greig in making those two knocks memorable is nothing short of significant.

Apart from the on-field action, the man, who was born in South Africa and went on to play Test cricket for England before joining Aussie greats Ian Chappell, Richie Bernaud and Bill Lawry on the Channel 9 commentary team, loved spotting female beauties in the crowd. He never hesitated to say, ‘Isn’t she gorgeous, or doesn’t she look ravishing?’ even if it left some of his co-commentators slightly embarrassed. And he was never averse to testing out the knowledge of his co-colleagues as well, be it on cricket or any other topic.

As a fan or an expert, you did not always have to agree with Greig. He never imposed himself on anyone. With him it always was, ‘You have a point mate, but what I feel is that...’ The ‘I’ was always prominent in Greig’s opinion. Having said that, he always made his point across in no uncertain terms. I sparingly remember the 2003 World Cup coverage where Venkatesh Prasad was a co-analyst on a post-game show. Greig put the former India pacer in place when the latter was giving his view on batting. I don’t remember the exact words, but it went something like ‘Mate, you don’t talk about batting, you never scored any runs.’ It was somewhat rude but, like always, he had a point.

In the last few months, I was wondering why listening to cricket had become so boring. And when the news of Greig’s death hit me, I instantly realised the rationale. The best tribute I can pay to Greig is that he made watching cricket an exhilarating experience for me. Thank you Tony Greig for making me fall in love withthe game as a kid. You went away too soon.

--By A diehard Tony Greig fan