Shame that rain had the final say at Manchester

When the third Test of the Ashes series kicked off, England would have been on a real high, having won the first two Tests, and in particular because they had thrashed Australia at Lord’s.

When the third Test of the Ashes series kicked off, England would have been on a real high, having won the first two Tests, and in particular because they had thrashed Australia at Lord’s. They would still be smiling now that they have retained the Ashes, with the Old Trafford Test ending in a draw. But, deep down each one of the players would know that they have been extremely lucky to retain the Ashes so soon. Had rain not intervened, they might as well have gone into the fourth Test with the series still alive.

The way the match ended, with weather playing the decisive role on the last day, was a real shame. For the first time in the series, Australia showed that they can compete against this strong English outfit. In fact, this was a Test that the Aussies dominated from start to end. However, at the end of the day, the weather just did not allow them to finish off what had been a near perfect performance. While on one hand the Michael Clarke and his men would feel hard done by, it is also a fact that they have only themselves to blame for not coming to the party earlier. 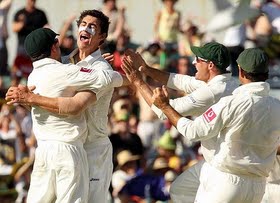 Australia will not be able to retain the Ashes now, but they must take a lot of heart from their comeback at Old Trafford and must now got all out to square the series, which will be a moral victory for them considering the poor start they made to the event. There are many positives that Australia can take away from the rain-enforced draw at Manchester, none bigger than the performance of their skipper Michael Clarke, who played a magnificent knock in the first innings to set Australia on the right path.

While Clarke was brilliant, the contribution of a few other players with the bat was also extremely significant. Before Clarke’s magic, it was Chris Rogers’ blast that gave Australia the much-needed impetus. In stark contrast to his dogged efforts in the earlier Tests, Rogers this time adopted a positive approach, which took England by surprise and put the hosts on the backfoot. Clarke was also well supported by Steven Smith. Even though he did not look comfortable out in the middle, he ensured he built a big innings, and was unlucky to miss out on a hundred. The alliance between Brad Haddin and Mitchell Starc was also crucial in taking Australia past the 500-run barrier.

With the ball in hand as well, Australia were extremely competent. Ryan Harris, making yet another comeback, proved what the side has been missing in his absence. He came up with wicket-taking deliveries every time Australia needed one from him. The experienced Peter Siddle continued to impress slogging it out and being rewarded with much important scalps. Left-arm seamer Mitchell Starc was less consistent by his contribution was no less significant since he grabbed key wickets at critical junctures. Almost everything went right for Australia, but for the weather.