This player has ability of Virender Sehwag, feels Wasim Jaffer

Even since coming to the fore as precious talent in school cricket, Mumbai batsman Prithvi Shaw has been touted as the next Sachin Tendulkar. He led India to the U-19 World Cup win in 2018. In the same year, he cracked a sparkling Test century on debut.

In recent times though Shaw has faced a couple of major setbacks. A horrendous ankle injury ruled him out of the historic Test series Down Under after which he was handed a ban for a doping violation. He did make his ODI debut in New Zealand earlier this year, but had a rough time in tough conditions. 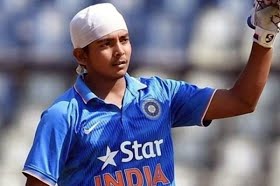 Former India opener Wasim Jaffer, however, opines that Shaw has the ability to become the next Virender Sehwag. Speaking to Aakash Chopra on his YouTube channel, the domestic giant termed him a special talent who can achieve a lot in international cricket.

“I think he is a special player, without a doubt. The shots he hits, if he gets going, he has the ability of Virender Sehwag I feel,” Jaffer, who played 31 Test for India, said.

Jaffer though admitted that Shaw needs to understand him game better. According to the 42-year-old, Shaw's inexperience was on show in New Zealand.

“He can completely demolish an attack. But somewhere I feel he needs to understand his game better, where he needs to take a backseat. I feel he got found out a little bit in New Zealand, got dismissed two times off a short delivery. He fell into their trap," Jaffer added.

In three Tests so far, 20-year-old Shaw has one hundred and three fifties to his name at an average of 55. As for Jaffer, he announced his retirement earlier this year after 24 years of domestic cricket during which he created numerous records.