Ajinkya Rahane has scores of 62 and 103 in the two ODIs in West Indies so far.

Ajinkya Rahane has scores of 62 and 103 in the two ODIs in West Indies so far. And, skipper Virat Kohli is pleased with his success.

"Jinks has been part of the one-day setup for a while. He is someone we all felt had great potential at the top of the order but when Rohit and Shikhar as an opening partnership play well in one-day cricket, then that really becomes a powerful package for us. 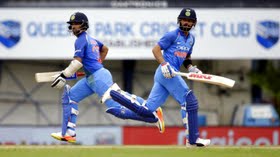 "But having said that, Jinks has always been there for us as the third opener, having gotten the opportunity in this series, so far he has batted well in both the games. Today also the way he paced his innings was really really nice, he was going run-a-ball, never fell behind the rate. The shorter format is something that we all know and he also knows that he wants to do really well because he is such an established Test player and is so solid there, he wants to make it count in these formats as well.

"Sometimes, as a batsman, you are undertaking too much pressure in those situations like some people do in Test cricket. I feel in this series, he has really started taking it as a cricket game, not necessarily a change of clothing or anything like that, I think he is enjoying his game much more in this series is what I see. It can only go up from here and improve his short-format cricket, which we are more certain of,” Kohli explained.

Kohli added that India could pick an extra bowler if Rahane delivered consistently. "If he keeps performing like this, he is someone who has done the middle order job as well in the past, so he can very well be the floater for you in the middle order and he is someone that might allow you to take an extra bowler, in a big tournament like the 2019 World Cup, a big series before that as well," Kohli added.