Karnataka’s win in the final of Ranji Trophy against Maharashtra was comprehensive in every sense.

Karnataka’s win in the final of Ranji Trophy against Maharashtra was comprehensive in every sense. At the end of the penultimate day, it seemed that Karnataka would be handed over the trophy courtesy the first-innings lead that they gained, their bowlers and batsmen fought back extremely well on the final day to lead their team to a comprehensive and, more importantly, outright seven-wicket victory. Although Karnataka would have been declared winners even if the game was drawn, the fact that they managed to finish off things made the victory even more special. 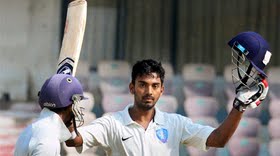 Karnataka’s performance in the first innings was without doubt the clinching factor of the match. After having restricted Maharashtra to 305 in the first innings, they needed to post a 500 plus score to feel safe. And, that is exactly what they did. They were dealt with a big blow early on when the experienced opener Robin Uthappa got injured. But, they responded brilliantly courtesy two wonderfully compiled knocks by the other opener Lokesh Rahul and number three Ganesh Satish. Both held the innings very well together and ensured that Karnataka were in an extremely strong position to win the trophy, at least on the basis of the first innings lead.

Uthappa who came back after getting his injury treated also played a crucial knock. His innings was instrumental in ensuring that the great job done by Rahul and Satish did not go in vain. It was during his stay at the crease that Karnataka went past Maharashtra’s first innings score of 305. The middle and lower order also chipped in cameos, which also played a part in the team get close to the 500-run mark. In the end, it all added up, and put Karnataka in an extremely strong position.

While Karnataka were in a strong position when Maharashtra began their second innings, credit must be given to their bowlers who picked up wickets at key moments during the innings and kept the team in hunt for an outright victory. Skipper R. Vinay Kumar led from the front with a four-wicket haul, but it was Shreyas Gopal, whose spell completely turned the final in Karnataka’s favour. With magnificent figures of 4 for 47, he kept Maharashtra on the back foot as they were kept down to 366 in their second innings. India discard Abhimanyu Mithun also chipped in with a couple of wickets.

Maharashtra did not play badly, but they did not perform well enough to be crowned champions either. In their first innings, Chirag Khurana, Ankit Bawne and Sangram Atitkar all got half centuries, but not one of them went on to register three-figure scores. They could never keep a hold on Karnataka’s batsmen with the ball, but they had an opportunity to push for a come from behind victory courtesy Kedar Jadhav’s counter- attacking century and Bawne’s second fifty of the serie. However, they collapsed and allowed Karnataka to race to an outright win. Deserving champions, they are!