When the Test series between India and New Zealand kicks off on Thursday, it will mark the first occasion in a number of years that neither Rahul Dravid nor VVS Laxman will be a part of the Indian Test line-up.

When the Test series between India and New Zealand kicks off on Thursday, it will mark the first occasion in a number of years that neither Rahul Dravid nor VVS Laxman will be a part of the Indian Test line-up. And while the fact is that we will never see their names on the score sheet again, Indian fans and the team in particular will take some time to recover from the big losses. The onus of taking India forward now lies in the hands of the untested youngsters, who have big boots to fill. Here’s a look at what they can offer. 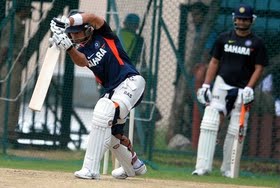 Virat Kohli: The Delhi lad has been in stupendous form with the bat in the shorter formats of the game, and even proved his Test credentials in Australia, where even the experienced trio of Tendulkar-Dravid-Laxman struggled. Undoubtedly, Kohli is the brightest of India’s future stars, but with only Tendulkar part of the middle-order -- he too doesn’t have much cricket left in him now –Kohli has suddenly begun looking like a senior statesman in Tests too. It will be unfair to expect Kohli to repeat his ODI feats in Tests. However, it goes without saying that he will have to shoulder a major burden of the responsibility.

Cheteshwar Pujara: The Saurashtra batsman made a wonderful Test debut with his knock of 72 against Australia, at Bangalore in 2010. However, since then, injuries and poor form have kept him out of the Indian side. He did play in the series against South Africa in his debut season, but found the going tough and was soon out of the reckoning for a while. He returns fresh now, and would be buoyed by the wonderful performance he put up during the ‘A’ tour to West Indies, where most of the others struggled.

Subramaniam Badrinath: The Tamil Nadu batsman is not a youngster by any stretch of the imagination. He will turn 32 towards the end of the month. However, when it comes to international experience, he does not have much exposure as he is only two-Tests old. It is only courtesy Laxman’s sudden exit that Badrinath has got another opportunity to prove his mettle. This may very well be his last chance though.

Ajinkya Rahane: How Rahane made it to the ODI and T20 squad ahead of Tests is somewhat of a mystery. With a solid technique and good temperament, Rahane was always touted to be an apt choice for the longer version of the game. Call it the IPL effect, the Mumbai batsman found himself playing in coloured clothing first. At last, he has got his much-deserved Test berth. But, it remains to be seen whether he gets a chance to prove his worth.

Suresh Raina: A surprise selection, the left-hander has a great opportunity to revive his Test career, but question marks will remain unless and until he delivers in away conditions.