Delhi Daredevils crushed Mumbai Indians by 37 runs for their first win at the Firoz Shah Kotla after 9 consecutive losses. The target of 191 runs never looked in control of the visitors as they kept losing wicket at crucial juncture of the game and finally ended 37 runs short. 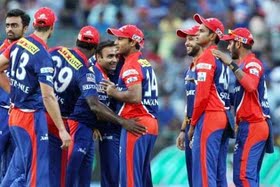 Chasing a big score, Mumbai Indians got off to a flying start as 35 runs were scored off the first 4 overs without losing a wicket. But Indian’s were soon pushed on back foot when both the openers threw their wicket away after getting reasonable start in a space of just 11 balls.

Rohit Sharma and Unmukt Chand(14) then looked to play themselves in but latter was deceived in flight by Amit Mishra as he bowled that little slower and Unmukt was stepping down the track, missed it completely and Karthik took off the bails in flash. Soon after that, Pollard(10) too paid the price of miss judging the line of Mishra.

Rohit Sharma(30) and Ambati Rayudu(30) anchored the ship of MI for a while but former got out just when he looked like setting up himself nicely for a final slaughter. The wicket of skipper opened the door for Daredevils as the batting of Mumbai Indian’s collapsed after that, they were reduced form 131-4 to 135-8. Getting three wickets in a over, Imran Tahir was pick of the bowlers for the Delhi Daredevils. With 13 wickets in six games, he is now the highest wicket-taker in this league.

Earlier, Mumbai Indian’s skippers won the toss and elected to bowl first which turned to be a good decision when Mayank Agarwal(1) was snared by Rayudu at mid-wicket off McClenaghan on just third ball of the inning.

JP Duminy(78*) and Shreyas Iyer(83) held the inning together and added a partnership of 154 runs which is highest for any wicket in this season. Iyer played a fine 56-ball knock which studded with seven boundaries and five sixes. Malinga bowled Iyer with a controlled Yorker when 19-years old moved a long way across the stumps to guide the ball through the fine leg region.

Mathews(17) played a little cameo and assured that the home team didn’t lose the momentum but soon when he edged the slow out swinger of McClenaghan to the keeper.

Duminy capitalized on his good start and went on to finish the inning with three fours and six sixes.

Mumbai Indian slumped to their fifth loss in the league and went at the bottom of the points table with just two points from six matches. With their third win in the sixth game, Delhi Daredevils are on the fourth spot.

Player of the Match: Shreyas Iyer