The Third ODI between Sri Lanka and Pakistan was abandoned after persistent rain for about five hours. The entire match saw 6.2 overs of action in which Pakistan struggled against the moving ball.

The Third ODI between Sri Lanka and Pakistan was abandoned after persistent rain for about five hours. The entire match saw 6.2 overs of action in which Pakistan struggled against the moving ball. The visitors lost two wickets – Mohammad Hafeez out for a duck in the first over to a magical delivery from Lasith Malinga which kicked away off the seam and then Azhar Ali wrongly given lbw to an indipper from Nuwan Kulasekara which struck his pad outside the line of off.

There was a drizzle just after the toss but it couldn’t prevent the match from getting underway on time. However, rain interrupted play just after the first ball was bowled! After sometime, the match resumed but only to see an interruption in the 7th over. Things became very gloomy in Colombo and the rain just didn’t relent for few hours to wash out the game completely. 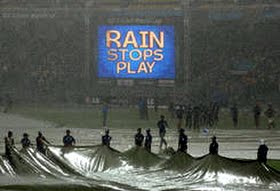 The 5-match series now stays at 1-1 with the fourth ODI scheduled to be played at this same venue on the 16th of this month.

Update at 2:05 PM local: Rain has delayed the start of play in the 3rd ODI between Sri Lanka and Pakistan at the R Premadasa Stadium in Colombo. However, toss was over by the scheduled time with Pakistan winning it and electing to bat first.

Update at 2:20 PM local: It turned out to be a passing shower which lasted about 5 minutes or so. We will thus have the match starting on time.

Both the teams have made one change to their XIs. Pakistan have strengthened their batting by bringing in Asad Shafiq in the place of fast bowler Rahat Ali. Sri Lanka have rested Rangana Herath from the remainder of the series. In his place comes Sajeewa Weerakoon, who makes his ODI Debut today at the age of 34.