Rohit Sharma explains how he approaches Tests and ODIs

Rohit Sharma had a terrible Tests series, with just 78 runs in two Tests. However, he is now looking forward to the ODIs, a format which he has somewhat mastered.

Rohit Sharma had a terrible Tests series, with just 78 runs in two Tests. However, he is now looking forward to the ODIs, a format which he has somewhat mastered.

Speaking about the two formats, Rohit told ESPNcricinfo, “You need to tell yourself that the shots you played in Tests and shots you play in ODIs are different. I am talking about myself. Every individual has their own plan, but when you play Test cricket it is important to analyse the situation, where the game stands at that point, and one bad shot can change the course of the game.”

On how he approaches the two formats, Rohit went on to explain, “In ODIs you think two steps ahead and want to put pressure back on the bowlers. And change it around. There are a lot of Test cricketers who think in the same fashion in ODI and Test cricket. For me, it is different and nothing changes other than mentally.” 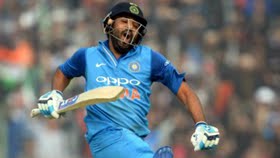 He further added, “Technical aspect remains the same. Yes, the shot selection and certain technical aspect of your game changes but mentally you have to keep telling yourself that you have to read the situation and try and analyse where the game is going and where you want the game to be going after the day’s play.”

The first ODI begins on Thursday.