IPL 8 qualifier Analysis: Mumbai were superior all round against Chennai

IPL 8 MI vs CSK qualifier 1 Analysis: It goes without saying that Mumbai Indians and Chennai Super Kings are two of the strongest outfits in the Indian Premier League.

It goes without saying that Mumbai Indians and Chennai Super Kings are two of the strongest outfits in the Indian Premier League. As a result of the same, the contest between the two heavyweights has produced some close matches over the years. But, the first qualifier between Chennai and Mumbai at the Wankhede Stadium on Tuesday definitely wasn't one of them. It were the hosts who dominated the proceedings, and put up such a good all-round show, that they never allowed Chennai even a sniff of a victory. To put up such a high-quality effort against a side that has never failed to make it to the play -offs is something Mumbai can be proud of. 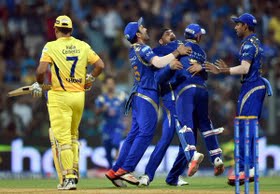 There a number of defining factors in the game that kept Mumbai well ahead of Chennai. The most significant of them was the batting blitz of Kieron Pollard. After having gotten off to a good start, Mumbai seemed to be losing their way with a couple of cheap middle-order wickets. But, Pollard's promotion to number four did the trick for Mumbai. His blitz of 41 from 17 balls which included as many as five hits over the fence, made the difference between a competitive and a match-winning total. Pollard is capable of playing some game-turning knocks, and Mumbai would be extremely pleased that he chose the big occasion for the same, and a dangerous opponent like Chennai.

Although Chennai had a tough task on hand they would have been confident of chasing it even without Brendon McCullum at the top. But, the chase never got going for them. And the deadly blows delivered by Harbhajan Singh completely shut Chennai out of the match. Over the years, for India as well as for Chennai, Suresh Raina and MS Dhoni have played key roles in tough chases. The team was looking up to the experienced duo again. But, Harbhajan is also a wily customer, and using his skills, he took out Raina and Dhoni off consecutive deliveries. Even though Chennai still had some batting left, the double strike dented their confidence, and they never had any rhythm after that.

Coming back to Mumbai, the start they got was very crucial in the big match. Although Lendl Simmons and Parthiv Patel began slowly, they did well to ensure that a wicket did not fall early. The assured start gave Pollard the freedom to throw his bat around later in the innings. Once again, Simmons proved why he is so crucial for Mumbai at the top of the order. The West Indian has consistently provided Mumbai with confident starts. On Tuesday, after a slow start, he picked up his strike rate rather fluently. And, while Rohit Sharma and Ambati Rayudu failed going for the big runs, Mumbai would be optimistic of them coming good in the final.

In the preview to the match, Stephen Fleming had candidly admitted that Chennai would miss McCullum. And they did. Mike Hussey was a great in his playing days, but age seems to have caught up with him. Dwayne Smith's form was a worry going into the big match, and he too failed although it must be said that he was unlucky. What Chennai needed to ace the chase were a couple of good partnerships, but they never came as Faf du Plessis was the only one who applied himself. Dwayne Bravo's off-day with bat and ball had a massive impact on Chennai's fortunes. It was a disappointing show overall by Chennai. But, they will get another shot at the final in qualifier number two.