Pakistan suffered its worst T20I defeat after losing to Australia by 94 runs today at Dubai. The series though has been won by Pakistan 2-1 which was courtesy of their Super Over victory in the second match.

Pakistan suffered its worst T20I defeat after losing to Australia by 94 runs today at Dubai. The series though has been won by Pakistan 2-1 which was courtesy of their Super Over victory in the second match. The irony of the Pakistani defeat was the fact that the margin of defeat – 94 runs was more than the total they had put up on the board – which was a mere 74 all out!

Needing 169 to win from 20 overs, Pakistan was rocked back to 15 for 3 in the 3rd over after which there was no recovery at all. The innings though went into the final over before the Aussies bundled them out eventually for 74. Young fast bowlers Mitchell Starc and Pat Cummings did most of the damage taking three wickets each. 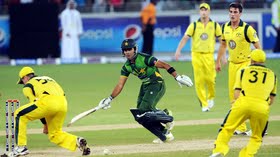 Australia Innings: Australia have been restricted to 168 for 7 in the third and final T20I at the Dubai International Stadium. This was after the Aussies had for once a great opening stand between Shane Watson and David Warner.

Asked to bat first, Australia was off to a dream start at 111 for 1 in just 10.4 overs! However, they lost their way though completely after the exit of its openers. Shane Watson was the first to depart after scoring 47 from 32 balls (with a four and 5 sixes). He was followed back to the dugout by Warner who fell after a smashing 59 from 34 balls (with a four and half a dozen sixes).

It was a disastrous second half for the Aussies as they could collect only 57 runs in 9.2 overs losing six wickets after the exit of the openers. Once again, Saeed Ajmal proved that he was too good for the Australians as he survived the onslaught to come up with outstanding figures of 4-0-19-2. Umar Gul and Yasir Arafat also chipped in with a couple of wickets each.