Few changes India can try out at the Kotla

The series against Pakistan went out of India’s grasp even before one could get the hang of the TV commercial for the series, in which senior Indian players are pronouncing with fierce determination – ‘aane do’ (bring on the Pakistanis!). If only they had shown such determination on the cricket field.

The series against Pakistan went out of India’s grasp even before one could get the hang of the TV commercial for the series, in which senior Indian players are pronouncing with fierce determination – ‘aane do’ (bring on the Pakistanis!). If only they had shown such determination on the cricket field. There is no point crying over spilt milk now. They still have a cricket match to play on Sunday and, as Ravi Shastri would definitely put it, although the game is only of academic importance India will still play for pride. With the series lost, there would be no pressure of expectations on India. As such, here are a few experiments they can try out in the final ODI at the Feroz Shah Kotla. 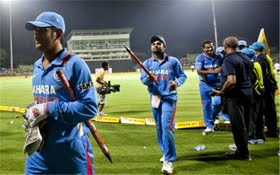 Drop Sehwag, bring in Rahane: This will be India’s last game before the ODI series against England kicks off. As such, they must give Ajinkya Rahane a chance at the top of the order by dropping Virender Sehwag. The flamboyant Indian opener has been struggling for a whole season now, and the way he has been flummoxed by bowlers in recent times, it is clear that his body movements have slowed down. Considering that technique has never been Sehwag’s forte, his loss of suppleness is hurting him as well as the team. Rahane is a deserved replacement for Sehwag, having proved his worth.

Dhoni batting at a higher number: It is an option fraught with risk for, if India lose M S Dhoni early, the Indian innings wouldn’t last as long as it has done in the first two games. At the same time, it must be remembered that we lost both the games in spite of significant contributions from the Indian skipper. The problem with him batting lower down the order in the current scenario is that all he is left to do after the early carnage is repair the damage to an extent and save some face for India. Batting higher in the order, he could probably dominate the opposition or at least make the middle order look a little stronger. If he fails in his endeavour, no one will blame him for lack of effort.

Blood in Shami Ahmed: If he’s in the team, why not give him a chance? As it is, Ashok Dinda is having a horror series and Ishant Sharma isn’t doing anything extraordinary. The Indians must take a clue from the Pakistanis, who never hesitate in blooding youngsters, especially fast bowlers. A right-arm medium pacer, Ahmed is an unknown quantity at the international level. So who knows, he might just have an ace or two up his sleeve, at least till the opponents get used to his style of bowling.

Play six batsmen, bring in Mishra: Ravindra Jadeja got a few wickets for India at the Eden Gardens, but his batting continues to embarrass for someone who has three triple hundreds in domestic cricket. Spin is India’s strength and although Pakistan are great players of spin, there would be no harm in trying out Amit Mishra instead of Jadeja. The seven-batsman theory ain’t working anyways.