World Cup hundred would have been a big achievement for Ikram Alikhil: Naib

Afghanistan's 23-run loss to West Indies in their last World Cup 2019 clash pretty much summed up the team's campaign in the tournament.

Afghanistan's 23-run loss to West Indies in their last World Cup 2019 clash pretty much summed up the team's campaign in the tournament. So near yet so far. After being well placed to chase down 312, their middle-order and lower unraveled as they ended up remaining winless.

18-year-old Ikram Alikhil was the surprise performer for Afghanistan. His fine 86 from 93 balls batting at number three kept the team in the hunt until Chris Gayle got the better of him. Before this, Alikhil was known for his 80 at the same position in the Under-19 World Cup semifinal last year. It was thus strange to see him batting at number 9 in the chase against India.

Skipper Gulbadin Naib, however, defending the decision to play him down the order first and then move him up saying it was what the team required while heaping praise on Ikram.

"Yeah, he played really well. But he missed a century in a World Cup, it would have bee a big achievement for anyone. He played a lot of cricket back home in the last two, three years. So also he played good cricket and Under-19 World Cup so this is why we have the opportunity to him," Naib said. 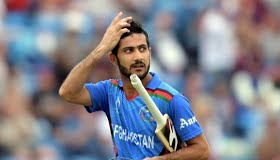 On the batting order changes, the captain explained, "If you look properly, we didn't give chances for every player in a fixed position in the batting order. If you look for the players, like me especially, I bat at No. 7 or 6 or 8. I just jump to the top for the last four, five games. It's a team requirement. A position is just a number. If you play with a big heart, any position is good on you. It's not a big problem for anyone."

Naib was obviously disappointed at Afghanistan's winless performance in the World Cup particularly after their impressive showing in the Asia Cup against the big teams. The captain felt the pressure on expectations probably proved too much for the team.

"First three games we played really badly. I accept it. Like against Australia, New Zealand, and Sri Lanka. Yeah, you target some games here like against Sri Lanka, Pakistan. Like we played quite well against India. And also against the West Indies. But I'm not happy with the team performance," he said.