Chahal: We have used conditions better than Australia

IndiaIndia have been dominant against Australia in the ongoing series, and Yuzvendra Chahal's success has been one of the main reasons for the same.

IndiaIndia have been dominant against Australia in the ongoing series, and Yuzvendra Chahal's success has been one of the main reasons for the same. 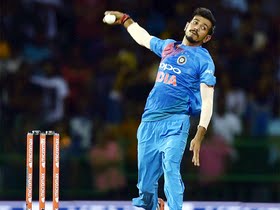 Chahal and Kuldeep Yadav have taken 13 wickets in the series. “I have never bothered about the batsmen I bowl to, be it for my club, State or India. I know my strengths, and I stick to it,” Chahal was quoted as saying in a report by The Hindu.

On his rapport with Kuldeep, he added, “I’ve known Kuldeep for a very long time. If I bowl first, I give him information about the pitch. Before the match, we discuss what the pitch will be like and how to bowl.”

Chahal also felt Indian spinners have an advantage over their Australian counterparts. “Our spinners have taken 13 wickets, compared to the three wickets taken by the Australian spinners. We have used the conditions better than them. This is our plus point. Also, they don’t have a wrist-spinner, apart from Adam Zampa” he said.