England completed a 2-0 cleansweep over the touring New Zealanders after beating them by 247 runs in the Second and Final Test at Leeds. Graeme Swann captured a match-haul of 10 for 132 to help England wrap up the match on the final day.

England completed a 2-0 cleansweep over the touring New Zealanders after beating them by 247 runs in the Second and Final Test at Leeds. Graeme Swann captured a match-haul of 10 for 132 to help England wrap up the match on the final day.

There was no play at all on Day 1 and the match was reduced to a 4-day contest as a result. England batting first after winning the toss posted 354 with youngster Joe Root scoring a wonderful 104 from 167 balls. Jonny Bairstow chipped in with 64 to rescue England from an otherwise tricky position. For the Kiwis, left-arm pacer Trent Boult picked up five wickets.

New Zealand conceded a huge lead after getting bundled out for 174 in just 43.4 overs. England strangely didn’t enforce the follow on though the Test match had already seen an entire day’s play washed out and rain likely to disrupt play in the next two days. England batted on an on till afternoon on Day 4 before declaring their second innings at 287 for 5 in 76 overs. 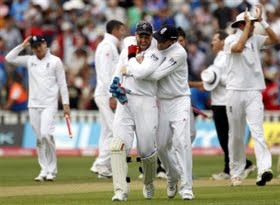 Skipper Alastair Cook top scored in the English second innings with 130 from 190 balls with 18 fours. Jonathan Trott scored a slow 76 from 164 balls. Part-time offie Kane Williamson picked up three wickets for the Kiwis.

By the completion of the fourth day’s play, the visitors were six down chasing an improbable target of 468. Rain on fifth day was giving New Zealand hopes of a draw but Graeme Swann ensured that there was no respite taking 6 for 90 in 32 overs. New Zealand collapsed to 220 all out in 76.3 overs. England needed around 22 overs only to take the remaining four wickets for a victory. Ross Taylor was the top scorer for the Kiwis in the second essay with his 70 from 121 balls. Swann fired England to victory taking 6 for 90 in 32 overs. He was the Man of the Match for taking a total of 10 wickets.