The Third and Final Test at Pallekele ended in a draw as Sri Lanka despite getting to a strong position at the start of the final session dropping its plans of pushing for a victory.

The Third and Final Test at Pallekele ended in a draw as Sri Lanka despite getting to a strong position at the start of the final session dropping its plans of pushing for a victory. Pakistan on the other hand tried to go for the win by claiming the last hour. However after 30 minutes, Pakistan gave up hopes and settled for a draw.

With the Third Test ending in a draw, Sri Lanka win the 3-Test Series 1-0. It is the first Test Series for Sri Lanka since 2009! For Pakistan, it was their first Series loss since July 2010 against England.

The final session began with Mahela Jayawardene joining Kumar Sangakkara with Sri Lanka needing 138 runs to win from 33.4 overs. A lot was expected from this duo to set up Lanka towards victory. But a dull start to the session brought down the momentum of the innings completely. After wasting many balls for his 11, Mahela Jayawardene got out tamely as he lobbed his paddle sweep off Saeed Ajmal to short fine leg.

Sri Lanka slowly moved to 178 for 3 before they lost another wicket when Thilan Samaraweera (10) was bamboozled by a doosra from Saeed Ajmal in the 56th over. The hosts after this decided to settle for a draw with Kumar Sangakkara (74* from 125 balls with 11 fours) and Angelo Mathews (1*) watchfully seeing off any further threats. Saeed Ajmal bowled with great heart taking 3 for 50 in 26 overs on what turned out to be placid track on the final day.

Asad Shafiq for his two great knocks in both the innings got the Man of the Match award. Kumar Sangakkara, who scored 490 runs in 3 Tests got the Player of the Series award.

Tea on Day 5: Sri Lanka are looking hot favourites to clinch a superb victory in the Pallekele Test as they go to Tea at 132 for 2 in 37.2 overs. The hosts need another 138 runs to win from 33.4 overs in the last session.

The run chase has been set up nicely thanks to an aggressive 65 (from 127 balls with 8 fours) from make shift opener Dinesh Chandimal. The Lankan openers saw through the shine of the new ball to put up 44 on the board before Tharanga Paranavitana (22) was caught nicely at second slip off Junaid Khan.

At the stroke of Tea, Dinesh Chandimal was caught by a diving Asad Shafiq at mid off when he was trying to go big against Saeed Ajmal. Chandimal with Sangakkara (35* from 59 balls with 4 fours) added 88 runs for the 2nd wicket. 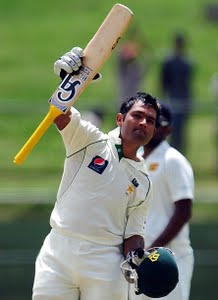 Lunch on Day 5: Sri Lanka asked to chase a target of 270 in 71 overs are 27 for no loss in 5 overs at lunch on the final day. This was after Pakistan had declared its first innings at 380 for 8 to give them a stiff target.

Asad Shafiq, the overnight batsman scored an unbeaten 100 (from 195 balls with 9 fours) while getting able support from the injured Adnan Akmal, who remained unbeaten with a brave 35* (from 96 balls with 4 fours). It was a brave declaration from Misbah-ul-Haq once Asad Shafiq got to his 2nd Test century to set up what could be a mouth watering finish.

Build Up to Day 5: The weather looks perfect for cricket as the Pallekele Test heads towards an exciting climax on the final day. Sri Lanka are the clear favourites to win from this stage with Pakistan having a lead of just 188 runs with two wickets in hand. The pitch has flattened out a bit and there is not much of venom for the seamers.

Pakistan will be desperately looking to score few more runs and also bat out some time through the overnight pair of Asad Shafiq (55*) and Adnan Akmal (0*). It doesn’t look that Pakistan can take 10 wickets in less than a day’s play so their chances of a victory seem to be less.