India vs England: We fail as a team, we win as a team, Virat Kohli after Headingley capitulation

Indian captain Virat Kohli said that he would not pick on any particular issue as the reason for defeat after India went down to England by an innings and 76 runs on Day 4 of the Headingley Test. Instead, Kohli commented that India ‘fail as a team and win as a team’. He conceded that they failed in the third Test.

India resumed their day on 215 for 2, but all hopes of a fightback were killed as they kept losing wicket after wicket. Cheteshwar Pujara perished without adding to his overnight score, Kohli fell after crossing his fifty and the rest offered no resistance. Even before the first session on Day 4 could end, the match was over.

Speaking at the post-match conference, Kohli put the defeat down to failure of the entire team. He said, "I know what happens when we lose one game. I have maintained in the past that we are not going to fall into a space where we start picking on issues. We fail as a team, we win as a team.” 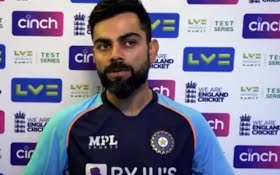 India’s middle-order has failed to deliver on a consistent basis for an elongated period of time. Asked whether it was a matter of concern, Kohli replied, "We analyse ourselves as a team in terms of what situations we are putting ourselves in, not with numbers. That happens on the outside, whether we are helping the team to build partnerships or putting the team in a good position is our only focus and there is no connection between the focus on the outside and the focus within the group.”

Kohli admitted that India will rotate their pacers and it is not feasible to play everyone together in every Test. He explained, “That's bound to open, it is a logical and sensible thing to do. You do not want to push individuals where they break, that conversation is important. So, we will have that conversation with the individuals and see where they are physically and who needs to have a game off. You cannot expect guys to play four Tests in a row."

India and England will now meet in fourth Test at The Oval from September 2.