BAN vs PAK 2015 3rd ODI Match report: Bangladesh have defeated Pakistan in the third one day international and won the series 3-0.

Bangladesh have defeated Pakistan in the third one day international and won the series 3-0. This is only the second time that Bangladesh have white washed any major test playing nation. Bangladesh were chasing the score 250 and achieved it in easily. 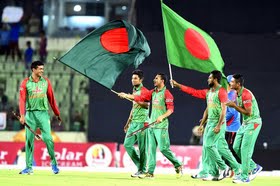 Tamim Iqbal started the chase very cautiously whereas his partner Soumya Sarkar went on all gun blazing. It was just the matter of time before Tamim also exploded and started playing his shot freely. With openers going on for slaughter , the Pakistani bowlers looked pretty ordinary. Soumya Sakar(127) stole the show today with a magnificent century which included 13 boundaries and six massive sixes.

Openers added 145 run for the first wicket before Tamim(64) was trapped leg before wicket of Junaid Khan. He struck again in quick succession when the stumps of Mahmudullah was knocked over.

Mushfiqur Rahim came to bat at number four and scored quick fire 49 runs to help his side cross the line inside 40 overs.

Earlier this afternoon, Pakistan skipper won the toss and elected to bat first which turned to be a good decision as the opening pair of Azhar Ali(101) and Sami Aslam(45) added 91 runs for the first wicket. Nasir Hossain found the edge of debutant bat when he was just five run short of his half-century. Then Arafat Sunny found a way through Hafeez’s defence as his stumps was shattered.

Haris Sohail(52) made a significant contribution in the middle order as he added a partnership of 98 runs with the skipper. In between Azhar Ali completed his maiden ODI century. Pakistan’s skipper inning contained 10 graceful boundaries.

Just after the century Ali was shown the door when he was guiding the Sakib’s delivery towards third man and the ball nipped back into the stumps.

Pakistan’s middle order were not able to capitalize on the start given by the top order and their inning collapsed after that, form 203/2 to all out on 250 and without batting out their full quota of overs. They lost their last eight wickets for just 48 runs.