In recent years, Australia have always been favourites whenever they have clashed with West Indies, irrespective of the format of the game.

In recent years, Australia have always been favourites whenever they have clashed with West Indies, irrespective of the format of the game. The semi-final contest would not be seen in a similar vein though since this West Indian side is a great T20 outfit, with players who can outsmart the best of opponents. Remember, the Caribbeans even tied the ODIs and T20s at home against the Aussies even as they came a cropper in the Tests. Being so, they should be reasonably confident going into the semi-final clash against the same opponent once again. Australia, on the other hand, would be expected to put behind the defeat against Pakistan, and go into the semis with a fresh mindset. 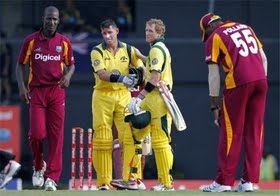 The loss at the hands of Pakistan reiterated that, in sub-continental conditions, Australia are extremely vulnerable to spin. Mohammad Hafeez and co exploited this weakness very well. Australia themselves would be aware where they went wrong, and would be keen to put up a much improved showing in the knockout clash against West Indies. The key for the Aussies would again be their in-form openers Shane Watson and David Warner. At the same time, Michael Hussey also gave a reminder of his class with a superlative half-century against Pakistan. But for his knock, Australia might not have qualified for the knockout stages itself, so poor was their display.

The Australians would be far more pleased with the way their bowling has shaped up.Both pacers Pat Cummins and Mitchell Starc have been extremely sharp while left-arm spinner Xavier Doherty has also looked the part. Concerns remain over the form of 41-year-old veteran Brad Hogg, but the team management seems to have a lot of faith in him. Accordingly, the left-arm chinaman bowler is likely to get another opportunity to impress. Stories have also been doing the rounds that David Hussey might be reinstated in place for Glenn Maxwell. The sudden change of mind on the veteran Hussey seems strange, but considering his experience it may be a risk Australia may find worth taking on the big occasion.

After watching the manner in which Australia crumbed against Pakistan’s spinners, it is almost certain that the Windies would go in with two spinners, Samuel Badree assisting the mystery man Sunil Narine. How well the two bowl, Narine in particular, and also how much improvement the Australia batsman show in the match, will go a long way in deciding the fate of the contest. West Indies shouldn’t overly rely on their spinners alone though. It will also be important for Ravi Rampaul and the other pacers to chip in with good back-up efforts.

Expectedly, their batting would bank heavily on the shoulders of Chris Gayle. The West Indian opener has continued his amazing run in T20, and Australia would be keen to see the back of him early. Although Gayle’s performance would be crucial, their batting isn’t a one-man army any longer. Johnson Charles has played one sensational knock while Marlon Samuels has also been among the runs. On their day, Dwayne Bravo and Kieron Pollard can mesmerise with the bat.

To put it simply, if there has been any West Indian outfit that has looked like winning a major tournament in recent times, it has been this Darren Sammy-led bunch of guys.