I caught it just by accident. Scanning through my cricket television subscription I saw that the India/Pakistan T20 game was about to begin. Not being a great fan of the game’s briefest form, my intention was to watch for a bit since there was nothing else of interest going on.

I caught it just by accident. Scanning through my cricket television subscription I saw that the India/Pakistan T20 game was about to begin. Not being a great fan of the game’s briefest form, my intention was to watch for a bit since there was nothing else of interest going on.

Upon beholding Pakistan’s giant debutant, Mahammad Irfan, I decided to linger for a while. The 7’1” left-handed pacer is the tallest man to play international cricket; taller than Bruce Reid, Curtly Ambrose and taller than his idol, Joel Garner -- this was Shaquille O’Neal’s territory. 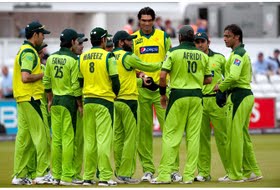 Height is a welcome attribute for a fast bowler. One only has to witness the difficulty batsmen have in negotiating Morne Morkel’s elevated bounce or recall Curtly Ambrose’s toe-seeking yorkers to appreciate its value. Add high pace and a fair degree of accuracy and you get fast bowling that will demand careful attention from even the best batsmen.

Mohammad Irfan ran in and bowled his four overs consistently around the 90mph mark. His direction was decent and the bounce he elicited was troubling to every player who faced him. Clearly bothered, Gautam Gambhir had one ungainly hook that looked more like an act of self-defence rather than any real attempt to attack the delivery. His four overs resulted in only a single wicket for 25 runs, but so well did he bowl that one could understandably wonder where he was being hidden all this time. He was, after all, 30, and had been playing for a while.

And yet the tall sturdy pacer was not the most impressive debutant on show. Also making a first appearance for India was all-rounder Bhuvneshwar Kumar. Less striking in appearance and of considerably less pace, the unimposing Kumar gave a grand display of the swing bowling art. Employing a high arm, he presented an upright seam and exhibited all the patience it was possible to show in just four overs.

He used four out-swingers to widen the opening between the left-handed Nasir Jamshed’s bat and pad before sneaking an in-swinger through the gap to remove the batsman’s off-stump. And if that were not remarkable enough he dished out similar treatment to the right-handed Umar Akmal, who had a hard time locating a few outswingers, only to be bowled by a huge in-swinger that began life inhabiting a line similar to those of the previously elusive deliveries.

In between those two dismissals he accounted for Ahmed Shehzad with a peach of an out-swinger that the batsman could only manage to edge into the wicketkeeper’s glove.

In four overs, Kumar took three wickets at the meager cost of just nine runs. It was a heartening if all too brief a demonstration of high class swing bowling. And while one should not get too carried away with a single performance in a T20 game, it is an indication that India has at least one fastbowling talent to boost an area in which they are largely deficient.

Kumar will need to work much harder than he did today if he is to excel in the future. Shining for four overs when batsmen are trying to smash the bowling to all parts is a far cry from slaving away for 40 overs in a test match when they are willing to sit and wait on the bad delivery. But even in that short spell the pacer was able to show that he had the skill and intelligence to excel in cricket’s longest format. And if there are concerns about his lack of pace, it might be instructive to note that Vernon Philander -- he of the impeccable line -- has taken the cricket world by storm while bowling at around the same velocity as Kumar.

In the end, Kumar’s show-stopping presentation could only delay Pakistan’s victory till the final over as India’s 133 was simply insufficient. The second game in this series will be at Ahmedabad on December28. In spite of my indifference to the T20 version of the great game I hope to tune in to follow the exploits of Mohammad Irfan and Bhuvneshwar Kumar. Until such time as I can watch them playing proper cricket, this will have to do.