Australia Will Be More Confident For Fourth Test

If Australia crashed and burned at Lords then Trent Bridge was a rising and a renewal. If terrible batting in the first two Ashes tests stripped Australian supporters of hope and hinted at the possibility of a series whitewash then their performance in the third test showed that there might be some stirrings of life in their batting after all,

If Australia crashed and burned at Lords then Trent Bridge was a rising and a renewal. If terrible batting in the first two Ashes tests stripped Australian supporters of hope and hinted at the possibility of a series whitewash then their performance in the third test showed that there might be some stirrings of life in their batting after all, and that the England bowlers might not have things all their own way at Chester-Le-Street and The Oval.

But for the assist to England provided by rain and bad light, the visitors might well have pulled one back. They dominated the game from the start and not even Kevin Pietersen’s valiant hundred, though it enabled England to avoid the follow-on, could slacken the tourist’s grasp on the controls of the game. 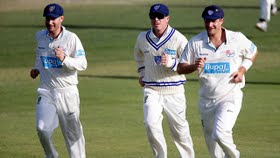 Despite the acute disappointment of the last day interruptions that halted their press for victory, the Australians leave for the fourth test at Durham feeling substantially more buoyant than when they arrived at Old Trafford for the third. England is still the superior side but there is evidence that the visitors have the capacity, not only to wage serious resistance but also to win. The Ashes are already retained, and so will not be wrung from England’s hands this series. But there will be another opportunity to recapture it starting in November, and Clarke and coach Darren Lehmann must be looking at how the pieces could be put together.

It was always expected that captain Michael Clarke would lead the batting. He failed to shine at Nottingham and at Lords, but he is too good a player to remain quiet for the entire series and it was only a matter of time before he showed his true mettle. He was uncertain at the beginning of his 187; he played and missed a number of times and had some luck, but his strokeplay blossomed as his innings progressed and his sure-footed and balletic method of playing spin is a joy to behold.

Perhaps just as important as the captain’s knock, however, were the contributions from the other batsmen. Chris Rogers, Steve Smith, Brad Haddin and the returning David Warner, all played with self-belief and positive intent. Rogers sent off his side to a confident start in the first innings by casting aside his standardstodgy style to play with a fluency that few had witnessed before.

When he departed for 84 Smith took up the responsibility of supporting Clarke and their 214-run union formed the backbone of the Australian innings. There are doubters who are of the view that the 24-year-old from Sydney is not really a specialist batsman but he played like one at Trent Bridge and at Nottingham, and though he was not originally selected for the tour, he has been a bright spot for the visitors. If he can forsake his penchant for needlessly throwing away his wicket, as he did when on 89 and in sight of a first test century, he could be a vital part of the Aussies resurgence, not the least because of his ability to intersperse wicket-taking deliveries within his otherwise erratic leg spin.

Brad Haddin had a good game both keeping and batting, while Warner looked good in scoring 41 in the second innings. A move back to his original opening position might be in order.

Unsurprisingly, there was always more faith reposed in Australia’s bowlers than their batsmen, and at Old Trafford they showed what could be accomplished when provided with the cushion of big runs. Those who might have wondered why the selectors have stood by Ryan Harris despite a history of more time spent undergoing repairs than playing on the park have been reminded of his worth. The 33-year-old Sydney pacer generated considerable pace, kept an insistent line, a nagging length, and elicited enough movement to pose a host of problems to England’s batsmen. Not only was he the best Australian fast bowler, he was the best fast bowler on show. He and the relentless Peter Siddle were always at the England batsmen.

It might be worth persisting with Mitchell Starc because of his ability to suddenly disrupt a batting line-up. Inconsistency is his drawback, however, and he was often not at his best at Old Trafford. Jackson Bird could still be given his chance at Durham.

England will continue to have an edge in the spin-bowling department, as Graeme Swann is a class or two above Nathan Lyon, who replaced an even less demanding Ashton Agar. The New South Wales off spinner bowled well, and though he captured only a single wicket he did produce some turn and posed a few problems. YetEngland’s batting is staffed by good players of uncomplicated spin and they will be confident of counteracting whatever Lyon can serve up. Nevertheless, Lyon was never expected to wreck England single-handedly -- a few useful breakthroughs in the remaining tests will suffice.

But whether the Australian selectors decide to make changes for the fourth test or not, England now know they are in a contest. Prior to the Old Trafford test, most pundits (including this one) had envisioned a whitewash in the future of Michael Clarke and his men. The hosts will do their best to quash Australia’s resurgence as early as the first day at Chester-Le-Street in order to prevent their newfound self-belief from taking firm hold.

Michael Clarke had maintained, even after falling behind 0-2 that they intend to win the series. Now that prospect of a 3-2 come-from-behind victory has been thwarted by the weather, he now has visions of a tied series. That’s a fair position to take. It is his job as captain to believe and to urge his men to do likewise. After all, the men from Down Under didn’t travel all this way for an aimless walkabout.