Maintaining their winning streak in Tests, India registered an impressive win, against Bangladesh by 208 runs in the one-off Test at Hyderabad on Monday.

Maintaining their winning streak in Tests, India registered an impressive win, against Bangladesh by 208 runs in the one-off Test at Hyderabad on Monday. The visitors, who were chasing an improbable target of 459 runs to win, managed 250 while batting for 100.3 overs at Rajiv Gandhi International Stadium.

India's spin duo of Ravindra Jadeja (4/78) and Ravichandran Ashwin (4/73) did most of the damage for Bangladesh, sharing eight wickets between themselves. Fast bowler Ishant Sharma claimed the other two scalps. He finished with decent figures of 2/40 in 13 overs. 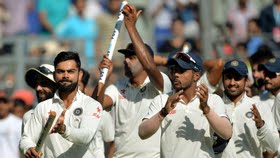 Although the spinners did the maximum damage, Ishant's spell was crucial. Bangladesh hung on gamely and need to bat out 58 overs to save the match in the last two sessions. A well-disguised short ball saw Sabbir Rahman fall to the lanky pacer for 22. A brilliant in-swinger then trapped the stubborn Mahmudullah plumb in-front for 64, and put India right on top.

Mehedi Hasan Miraz played well for his 23, which consumed 60 balls. However, he was the eighth batsman out to a Jadeja's delivery kicked up sharply, and took the edge. The formalities were completed soon after.

The victory against Bangladesh was the India's eighth triumph in nine home Tests this season, the one draw coming against England at Rajkot. India have now been unbeaten in 19 Test matches in a row.

With his latest win, Kohli also went past Mohammed Azharuddin on the list of Indian captains with most Test wins. With 15 victories, he is now third on the list, after Mahendra Singh Dhoni and Sourav Ganguly.