AB de Villiers and Albie Morkel hit half centuries in South Africa’s modest total of 237 for 9 in a 2-day tour match at Worcester.

AB de Villiers and Albie Morkel hit half centuries in South Africa’s modest total of 237 for 9 in a 2-day tour match at Worcester.

AB de Villiers, who is leading the visitors in this match top scored with 80 (from 118 balls with 12 fours). Albie Morkel helped himself to 50 (from 77 balls with 9 fours) while pace bowler Vernon Philander scored an unbeaten 40 (from 74 balls with 4 fours and a six). 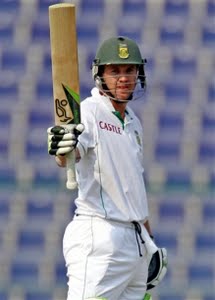 South Africa batting first after winning the toss declared their innings at 237 for 9 in 65.5 overs.

For Worcestershire, medium pacer Chris Russell captured 3 for 40 while Moeen Ali and Shaaiq Choudhry took two wickets each. By the close of the first day, the Proteas reduced Worcestershire to 70 for 3 in 22 overs.

Opener Matthew Pardoe remained unbeaten on 40 (from 69 balls with 6 fours) for the hosts. For the Proteas, Dale Steyn picked up two wickets and Morne Morkel got one wicket.