Check your facts, I am a team man: Ajinkya Rahane responds to criticism on lack of runs

Ajinkya Rahane has refuted criticism that he has not scored enough runs for the team of late. According to him, he is a team man, and has contributed whenever the team has needed him to. The Indian vice-captain, who scored a match-winning hundred in Melbourne while leading the team, has struggled for form since. In the ongoing Test series against England, he has only one half-century to show for his efforts.

Speaking at a virtual press conference, Rahane said, "I was expecting this question. You need to check your facts right, you know my contribution to the team. Whenever the team needed me I scored runs for my team. So you need to focus on your facts to come up with the question.”

Replying to the query about his form, he further added, "I am team man and whenever the team needs me to perform in a particular situation, I have always done that so I am not too concerned about it. As a player I always look to learn, look to grow which is really important.” 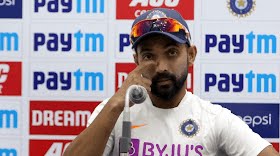 Rahane also brushed aside criticism from former England players like Michael Vaughan, Andrew Strauss, Alastair Cook and Monty Panesar over the surface, stating that talk happening outside is not at all affecting the Indian team. "We are concentrating on what we have to do. When we tour we never complain about the pitch," he pointed out.

The Indian batsman also asserted that the hosts would not get complacent despite the 2-1 series lead. "We respect England... They are a very good team, balanced team. We are not taking them lightly. It's another Test match and we want to go out there and give our best. Equally, England would want to give their best and look to win."

A draw or win will put India in the World Test Championship (WTC) final. A loss will see Australia progress to the WTC final at Lord’s.