It was the year 2013 when Rahul Dravid promoted a 19-year old Sanju Samson to number three in a match against the RCB. Playing for the Rajasthan Royals, the then youngster from Kerala blazed his way to a magnificent 63 as he helped his side chase down a target of 173. Since then, he has been known for playing all or nothing kind of knocks, he either wins you matches from nowhere or he simply throws his wicket away.

Fast forward to 2020, not much has changed as far as his reputation is concerned, though he has shown enough consistency to break into the playing eleven for India in the shortest format. Following the retirement of MS Dhoni, he is now a contender for the wicketkeeper’s slot, though KL Rahul seems to be the frontrunner as of now. While there never has been a single question mark over his talent, it’s his consistency which often leads to his downfall. He is a naturally attacking player, and he seems to be given the license to express himself right from the start, be it IPL or international cricket. While he had decent numbers as far as IPL is concerned, he never really had a breakthrough year. That was the reason he didn’t feature in any international match for India between 2015, the year he made his debut, and before the current year. In this year’s IPL, he amassed 375 runs at an astonishing strike rate of nearly 160. 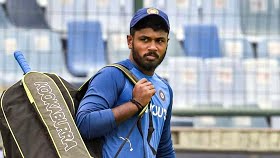 So, if he blows hot and cold, why should he be persisted with in the long run? Simply because of his effortless striking, he brings a wow factor to the team. India batters traditionally aren’t known for hitting big sixes, but Samson fills that gap. You need someone like him at the big stage, who doesn’t get too perturbed by the situation and can play his natural game without feeling the pressure. He has the striking ability of a Buttler or a Maxwell, who can change the complexion of the game with a couple of hits.

But the problem with playing him in the current setup is finding the right position for him. You would normally want such an explosive batsman to bat right at the top and do the maximum destruction, but that looks unlikely as the troika of Rohit Sharma/Shikhar Dhawan/KL Rahul are already fighting for the openers slots. Number three is obviously occupied with Virat Kohli, and that leaves Samson with number four/five. He has already played a couple of cameos this series against Australia coming in at number four, and has to make most of the opportunities he gets, regardless of the number he bats. Solid behind the stumps and a gun fielder otherwise, he brings a lot to the table other than his batting. Now that the selectors are finally giving him the longer run, it will be interesting to see if he is able to make the most of it and play a crucial role in the World T20 in India next year.