Rajasthan Royals wouldn’t be disappointed that they did not make it to the IPL 6 final. The fact that they progressed to the last four in spite of having just one superstar player in Shane Watson is nothing short of an achievement for Rajasthan Royals’ men.

Rajasthan Royals wouldn’t be disappointed that they did not make it to the IPL 6 final. The fact that they progressed to the last four in spite of having just one superstar player in Shane Watson is nothing short of an achievement for Rajasthan Royals’ men. But, throughout the season, Rahul Dravid’s men have prided themselves on putting up their best in all departments of the game irrespective of the result. In that respect, they would be frustrated by their abysmal fielding effort on Friday, which went a long way in them not making it to the summit clash.

Defending a total that can best be described as challenging, Rajasthan ought to have been at their best with both ball and in the field. And, while their bowling was steady without being threatening, Rajasthan’s fielding on the day was nothing short of shambolic. There were misfields, overthrows, fumbles and a dropped catch at a stage where the match was evenly balanced. All this combined to allow Mumbai to escape to victory, and book their place in the IPL final for only the second time, where they would meet Chennai Super Kings, their final opponents back in 2010 as well. 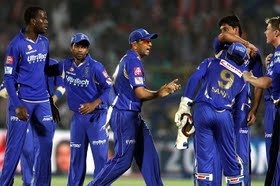 While Rajasthan were exceedingly poor in the field, it must be said that Mumbai’s batsmen also played a major role in allowing Dravid’s men to stay in the game till the end overs. After getting off to a blazing start, Mumbai just needed to bat out the overs to cruise to victory. Instead, their batsmen played some strange shots to keep Rajasthan in with a chance. The most bizarre aspect of such dismissals were that most of these batsmen got out chipping the ball in the air, and not while trying to clear the field with the big hits, which would still have been understandable. It was as if Mumbai’s batsmen wanted to make the crucial game interesting, and they almost paid the price for it.

In the end, the cushion of a strong opening partnership and some smart hitting lower down the order saw them through to victory. Dwayne Smith played yet another sizzling innings at the top of the order, and he was well supported by Aditya Tare in the absence of Sachin Tendulkar. Dinesh Karthik could not get the desired big score, but his breezy cameo at least ensured that Mumbai always stayed ahead of the required run rate. In the slog overs, Ambati Rayudu played a couple of fancy strokes, which swung the momentum of the game, and by this time, Rajasthan’s bowlers were beginning to feel the pressure.

Earlier in the evening, following a delayed start, Harbhajan Singh came up with wonderful spell to restrict Rajasthan to a gettable total. His dismissals comprised all three big names – Watson, Dravid and Rahane and so it wasn’t surprising that he was named the man of the match. Thanks to Harbhajan’s blows, Rajasthan could not get the desired score on the board. Skipper Dravid played a substantial knock, but the others got starts and fell. Dishant Yagnik’s crisp knock took them to a respectable total. But, considering their shabby fielding, they were at least 30 runs short.

Turning point of the game: The penultimate over of the game, bowled by Kevon Cooper, which cost 15 runs. Mumbai needed 23 off 12 balls, and following this over, which included a dropped catch they cruised to a win.