Having won their first matches rather comfortably, Bangladesh and New Zealand will take on each other in their second match at The Oval on Wednesday. Bangladesh have done well against New Zealand in recent times but this Kiwi side is on a different level.

Having won their first matches rather comfortably, Bangladesh and New Zealand will take on each other in their second match at The Oval on Wednesday. Bangladesh have done well against New Zealand in recent times but this Kiwi side is on a different level. 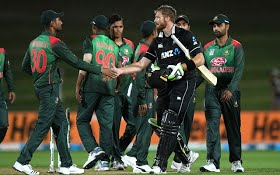 New Zealand were brutal against Sri Lanka, rolling them over for 136 in Cardiff. Matt Henry was the star of the show with his incisive spell, running through the Lankan top and middle order. Lockie Ferguson and Trent Boult also made an impression. If the conditions favour them again, the Kiwi bowlers can again prove to be a handful.

New Zealand were ruthless with the bat as well. Chasing a low score, there is often a chance of the batsmen taking it easy. To their credit, both Martin Guptill and Colin Munro stuck it out and ensured that the Kiwis won the game without losing any wickets. The game against Bangladesh will give skipper Kane Williamson and Ross Taylor a chance to get among the runs.

Speaking about Bangladesh, they too would be pleased with the excellent effort they put up against South Africa. In a big tournament, the seniors are expected to stand up, and this is exactly what Mushfiqur Rahim and Shakib Al Hasan did against the Proteas. Mahmudullah also did very well in the last match so overall they would be pleased with their effort so far.

Bangladesh's batsmen however would be expected to have it tough against the likes of Henry, Boult and Tim Southee, who are adept at moving the ball. As there is expected to be cloud cover, the Kiwis are likely to get an advantage. At the same time, Bangladesh have players who can stand up to the tough Kiwi challenge.