Bangladesh did not produce any miracle in the Mirpur Test, and succumbed to a massive 328- run defeat against Pakistan, to hand the series to the visitors.

Bangladesh did not produce any miracle in the Mirpur Test, and succumbed to a massive 328- run defeat against Pakistan, to hand the series to the visitors. With Shahadat Hossain not able to bat, Pakistan in effect needed only eight wickets to claim the series. Bangladesh's batting collapsed in the face of the constant pressure put up by Pakistan's bowlers. Mominul Haque was the only one who put up some sort of resistance. Yasir Shah finished with impressive figures of 4 for 73 as Bangladesh lost six wickets for the addition of 57 runs. It was a disappointing way to end a heartening series. 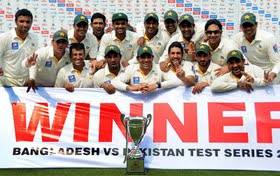 At the start of the day, Bangladesh would have pinned a lot of hopes on their opener Tamim Iqbal. He tried to be cautious, but his natural aggressive instinct eventually got the better of him. He edged a wide delivery behind the stumps to be dismissed for 42, not adding a lot to his overnight score. Mahmudullah's stay at the crease was even shorter. He was troubled by the rising deliveries from Wahab Riaz. However, it was eventually Imran who ended his misery, getting Mahmudullah to edge one to second slip.

Shakib Al Hasan and Mominul tried to adapt an aggressive approach. Hasan managed a couple of streaky boundaries, but it did not last long as he was caught at mid-off attempting to hit Mohammad Hafeez for a six. Skipper Mushfiqur Rahim also fell to spin. He stuck to defensive cricket, as was the need of the hour, but dragged a leg-break from Yasir onto the stumps just prior to lunch. Even as wickets kept falling, Mominul singlehandedly kept the fight going for Bangladesh. Not only did he pull and hook with ease against Wahab, but displayed impressive footwork against the spinners as well, crossing the half-century mark in his 11th consecutive Test.

What Mominul needed was some support which never came. Soumya Sarkar failed again, caught down the leg side off Wahab's bowling. Mominul too gave up the fight, mishitting Yasir to cover. The wickets continued to fall for Taijul Islam as he top edged a sweep. Shuvagata Hom entertained with a stroke filled 39 from 55. He was eventually cleaned up by a Junaid Khan yorker, as Pakistan salvaged some pride from a disappointing tour. While Yasir claimed four, the pacers shared the spoils as well to complete a convincing victory.