The final: A clash between Chennai’s batsmen and Mumbai’s bowlers

So here we are finally! After a month-and-a-half of many seemingly brainless matches, it is a relief that the Indian Premier League is finally coming to an end. In the wake of what has transpired over the last fortnight, the title clash has little significance left.

So here we are finally! After a month-and-a-half of many seemingly brainless matches, it is a relief that the Indian Premier League is finally coming to an end. In the wake of what has transpired over the last fortnight, the title clash has little significance left. The owner of the most successful side in the franchise, Chennai Super Kings, who will be one of the finalists, is cooling his heels in custody even as his franchise, which has now disowned him, gets set for battle on the field. But, as they say, the show must go on, and keeping in with the spirit, Chennai and their opponents, Mumbai Indians would keen to lay their hands on the trophy.

Since Chennai have already won the IPL twice before, and have been finalists five out of six times, they would undoubtedly be viewed as the favourites. One of the prime reasons why Chennai have been so successful over the years in the event is because there have been very few changes in personnel in the team over the years, unlike all the other sides. Mind you, the case could also be vice versa. Another advantage they have over Mumbai is that they have beaten the latter in the IPL final before, in 2010. Mumbai would thus be eager to win this time. It remains to be seen whether all the off-field drama surrounding the franchise will affect the Chennai players.

Speaking of the match up, the final clash of the tournament might well be decided by the contest between Chennai’s batsmen and Mumbai’s bowlers, the stronger suits of the respective sides. Michael Hussey may have retired from international cricket, but he has been nothing short of sensational at the top of the order for Chennai. In fact, he goes in the final as Orange Cap holder, having taken over from Chris Gayle. Thanks to Hussey’s brilliance, Chennai haven’t suffered owing to Murali Vijay’s lack of form. As for Vijay, he is a big match player, who was the man of the match last time Chennai won the crown and, hence cannot be written off. 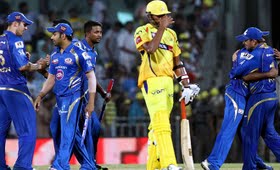 Suresh Raina is the other man, who has continued his IPL dominance. Although he had mixed luck in the initial matches, he has come into his own in the recent games, and in the qualifier against Mumbai he was at his aggressive best. MS Dhoni, Ravindra Jadeja and Dwayne Bravo have also come good with the bat when needed. As for Mumbai’s bowling, they would be heavily reliant on Harbhajan Singh, who struck form in the qualifier against Rajasthan Royals, and Mitchell Johnson, who has been their most effective bowler this season. Although Lasith Malinga hasn’t been at his best, his needs to have only one good game to undo all the poor work.

There are a few other players from both teams who will be crucial to their side’s chances on the big day. From Chennai’s side, the likes of Albie Morkel, Ravichandran Ashwin and S. Badrinath have not had much to do, but they are experienced campaigners, who can deliver in crunch situations. As for Mumbai, Dwayne Smith will be crucial at the top of the order again, while Rohit Sharma would want to lead from the front one final time.