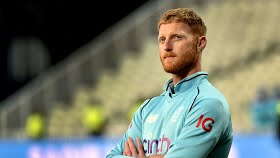 England all-rounder Ben Stokes has taken an indefinite break from cricket and will miss the upcoming five-match Test series against India, which will start on August 4. The England Cricket Board (ECB) announced the same on Friday, July 30. The board informed that Stokes wants to focus on mental well-being. At the same time, his index finger will also get a chance to heal.

The best we have bowled in the last few years: Dasun Shanaka after Sri Lanka’s T20I series win

Sri Lankan captain Dasun Shanaka hailed his bowlers after the hosts got the better of a depleted India by seven wickets in the third T20I ...

Hats off to the boys for taking it to the last over: Shikhar Dhawan hails depleted side after fighting loss

Question marks over Shaw, Yadav flying to England as they isolate after Krunal Pandya tests positive in Sri Lanka

The second T20I of the series between India and Sri Lanka has been postponed by a day after India all-rounder Krunal Pandya tested positive for ...