Axed Indian speedster Zaheer Khan has stated in a recent interview that he still hasn’t given up hopes of making an international comeback although he is nearly 35 now and not getting younger.

Axed Indian speedster Zaheer Khan has stated in a recent interview that he still hasn’t given up hopes of making an international comeback although he is nearly 35 now and not getting younger. Even since the retirement of Javagal Srinath, the left-arm seamer has been India’s best pace bowler, which is why it is heartening to learn that the pacer from Baroda, who plays for Mumbai, hasn’t given up yet. Khan wants to play on for another three to four years, and if the veteran manages to return and carry on for the mentioned duration, it would be a big plus for the Indians.

Some pundits may argue that India must look ahead and leave the Khan episode behind. But, the fact is that India need the experience of the pace bowler since the youngsters don’t have a guiding hand at present. Of course, the man himself must also perform, but that is another matter altogether. Khan had a poor 2012, and it did not help that the other senior members in the side were also underperforming as a result of which India had hit a losing spree. Then again, it is also a fact that Khan the unassuming Khan was made one of the scapegoats for India’s loss to England, even as some of the batsmen who have been equally poor have maintained their position. 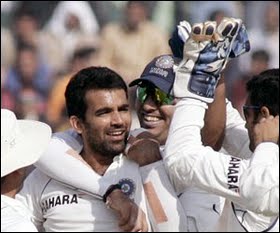 The problem with having a Khan-less side is that India haven’t found an adequate replacement for him. Ishant Sharma hasn’t really kicked on from the impressive start he got in international cricket. Among the others, Umesh Yadav has done reasonably well for India in his brief stint, but he certainly needs to find a way to stay away from injuries to be available more often. Ashok Dinda continues to blow hot and cold while Praveen Kumar remains absent hurt. It was great to see Bhuvneshwar Kumar and Shami Ahmed taking some strides in the one-dayers, but one cannot expect them to succeed overnight in the Test arena.

Khan is currently injured and it is not quite clear whether he will be available for selection for the Australia series, and if he is, whether he will be picked. But, looking at the longer picture, the selectors must give him another chance at the international level. May be, just may be, Khan had an off season last year just like all cricketers have a bad year sometime or the other. It could just be a coincidence that his poor times collided with India’s losing streak. Remember Khan has been a one-man show in the pace department for India for more than half a decade, and had rarely failed to deliver until last year.

In case Khan does get a deserved opportunity to make a comeback, he must prioritise things. Playing in both Tests and ODIs is certainly not an option, although Khan harbours hopes of the same. India need the veteran more in the five-day version, and he must concentrate on the same if he wants to elongate his career. The one-day side is doing just fine, and there is no need for the oldwarhorse to overburden himself at this stage of his career.