The first Test between South Africa and England being played at The Oval is a special one for Proteas’ skipper Graeme Smith for sure. The match marks the 100thTest of the career, a glorious one for sure.

The first Test between South Africa and England being played at The Oval is a special one for Proteas’ skipper Graeme Smith for sure. The match marks the 100thTest of the career, a glorious one for sure. And while a South African win with a significant contribution from the captain would be the perfect way forthe left-hander to mark the occasion, it should be a memorable game for Smith, the result of the match notwithstanding. Smith is known to be a big-match player, so there is no reason why he shouldn’t succeed in another major encounter.

Looking back at Smith’s career so far, it can be termed as an illustrious one without doubt. In 99 Tests till date, the man who is still only 31 has amassed 8042 runs at an average of nearly 50. This comprises 24 tons and 32 half-centuries, with a highest of 277. All the numbers are impressive no doubt, but the contribution of Smith to the team goes beyond just these numbers. What he has brought to the side is a newfound confidence and ability to strike back, something the South Africans had lost in the couple of years following Cronjegate. 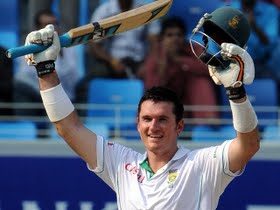 In a way, Smith’s story is very similar to that of Sourav Ganguly. If the Indian team seemed lost following Mohammad Azharuddin’s fall from grace, and needed somebody to inspire them, the Proteas were also seeking something similar. For both countries, there was a silver liningin the entire match-fixing saga. WhileGanguly came forward and gave the team confidence and the belief to win, especially away from home, which they had rarely done in the pre-Ganguly era, Smith took over from an honest but struggling Shaun Pollock, and delivered as well.

WhenSmith was handed over the reins of South Africa, they were in total doldrums. South Africa were knocked out of the 2003 World Cup in the most embarrassing circumstances. Also, not everyone approved of Smith’s elevation to the leadership, especially when another much-senior member like Jacques Kallis had been part of the squad for quite a few years. As expected, Smith did not have it easy early on. However, from a man who seemed lost in a world of uncertainty, Smith has risen to become one of the most respected leaders in world cricket. He is still not the most tactically brilliant captain, but knows how to get his players to perform to the best of their ability.

While as captain he has grown significantly, he has also been among the team’s premier batsman. His twin double centuries on South Africa’s tour of England in 2003 remain among the more memorable knocks by a South African. He also proved that he is a tough character by coming out to bat in a Test against Australia at number 11, with a bruised hand. South Africa lost the match, but Smith won a lot of admirers.

If he can guide South Africa to the number one spot at the end of the ongoing series, his respect in world cricket will go up notches.