Final review: Decision to open with Malinga was a masterstroke

The result of the IPL 6 final was all but decided in the first over of Chennai Super Kings’ chase. MS Dhoni’s men were chasing a challenging total on a tough surface at the Eden Gardens, Kolkata.

The result of the IPL 6 final was all but decided in the first over of Chennai Super Kings’ chase. MS Dhoni’s men were chasing a challenging total on a tough surface at the Eden Gardens, Kolkata. For them to lift the crown a third time, it was imperative for Mike Hussey and Suresh Raina, their two in-form batsmen, to come up with the goods one more time. However, this is where Mumbai Indians outsmarted them. The decision to open the bowling with Lasith Malinga turned to be a masterstroke in every sense of the word.

Up until the final, Malinga had a very poor series, but the threat with him always existed, and hence Mumbai’s decision to retain him for the final in spite of his poor performances made absolute sense. The Sri Lankan slinger reiterated how dangerous he can be dismissing both Hussey and Raina with superb deliveries. The manner in which he got his wickets also proved that Malinga is a smart thinker and not just an out-and-out fast bowler. Well aware that the best to get Hussey out early on is via a yorker, Malinga produced the perfect delivery to knock back Hussey’s stumps. He then bowled a vicious short ball to Suresh Raina and had him caught, leaving Chennai in unfamiliar territory. 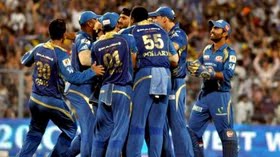 What Mumbai did amazingly well even after getting the big early breakthroughs was maintain the pressure with the ball constantly. All the bowlers chipped in to never allow Chennai in with a chance. Mitchell Johnson ended a great series for him on a high dismissing Murali Vijay and Subramaniam Badrinath. Rishi Dhawan got the big scalp of Dwayne Bravo, Harbhajan Singh contributed by picking the scalps of Ravindra Jadeja and Chris Morris while Pragyan Ojha sent back the dangerous Albie Morkel. Chennai, it must be said, did not help their cause by playing some atrocious shots at the start of their chase.

Earlier in the evening, Chennai also gave away the advantage of a great start with the ball. Mohit Sharma and Albie Morkel combined to have Mumbai in all sorts of strife early on. Batting first, Dwayne Smith was going to be the key to Mumbai’s chances early on, but Mohit Sharma, who has been a find without doubt for Chennai, trapped him smartly. The undervalued Morkel then chipped in with the major scalps of Aditya Tare and skipper Rohit Sharma. Chris Morris then ensured that Dinesh Karthik once again did not go past a cameo.

It was one man who basically turned around the match for Mumbai. Kieron Pollard’s sheer brute force came to the fore on the big day and so, even though Mumbai kept losing wickets at the other end, they ended up with a challenging total. Ambati Rayudu played a smart innings for Mumbai, but it was undoubtedly Pollard who took the game away from Chennai, with some smashing strokes, before Malinga sealed the final in Mumbai’s favour. In an irony of unbelievable sorts, players from Chennai ended up as the Orange and Purple cap holders; MS Dhoni was the top scorer in the final, and yet they ended up on the losing side.

Turning point of the game: Undoubtedly, Malinga sending back Hussey and Raina in the first over of the chase.